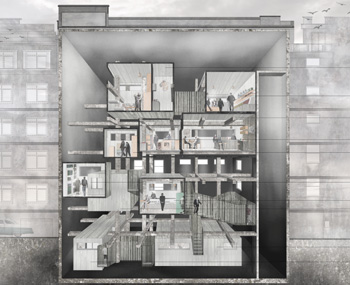 Charlotte's 'Veterans of Soho' concept, selected by a panel of judges including practising interior designers, academics and critics, looks to create a new sense of community in Soho by reconnecting the area with those who lived and worked there in the 1950s.

"I chose Soho as an area to look at because it's so different from Oxford Street and surrounding areas," Charlotte explains of her project. "It never used to be about money, shops and restaurants, but about its people. I started to look at what it was like in the 1950s, because that's when it started to create its character."

Charlotte's research led her to Daniel Farson's book Soho in the Fifties, which tells tales of the diverse range of people who used to frequent the area and contributed to its distinctly lively, often sordid reputation. It led her to wonder what happened to the now-elderly people who had made Soho what it was, but had since been displaced from the area and lost the connections they once had, as well as losing touch with their surrounding community in general. 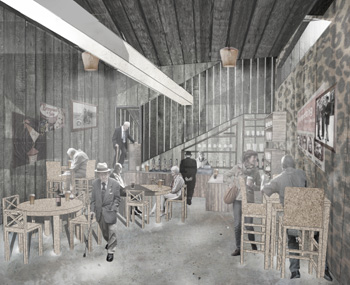 "The point of my project was to bring back the lost generation, to reintegrate these elderly people into society and and reconnect all the friendships they had in the 50s when they used to live and work in Soho," she explains.

Charlotte designed a multi-use space set across a number of buildings located just off Oxford Street. The hub would house a patisserie, a pub, apartments and various other spaces designed for Soho's 'veterans' to meet and socialise. A public pathway connecting the different units would open the spaces to the public and create a feeling of openness and transparency.

Charlotte attributes the positive response her design has received, particularly by the judging panel of the 2014 IE (Interior Educators) Awards, to its emotional resonance. "It's quite an emotional thing that everyone can connect with – everyone has a grandparent or perhaps a neighbour who has lost a husband or a wife, so they can connect with it," she says. "It's also quite realistic; I think this project could be made in real life, and I think it would be a good thing if it was.

Charlotte also praises the support and inspiration she received from the teaching staff at Middlesex in helping to develop her concept. "The tutors are excellent; they teach you to think in a completely different way than you're used to."