Middlesex animation students take a peek at what happens behind-the-scenes of a world-famous animated film studio. 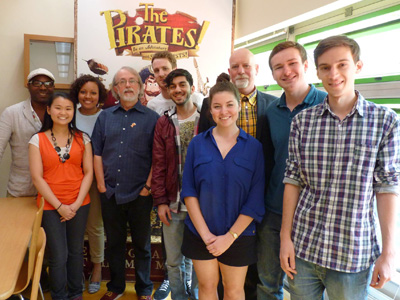 This summer, a cohort of final-year BA Animation students travelled to the Bristol studios of Aardman Animations, where they were treated to an exclusive look at the making of the upcoming Shaun the Sheep feature film.

Students were introduced to Aardman founders, Peter Lord and David Sproxton, before taking a tour of the Shaun the Sheep film set and getting an insight into the animation processes and workflow of this buzzing world-renowned animation company.

The trip – one of a series of high-profile studio visits undertaken by Middlesex animation students every year – was an eye-opening experience for students on the verge of setting off on their own animation careers.

"I didn't know that one Shaun the Sheep puppet takes up to three months to create and roughly two weeks to re-create by hand!" said Pamelyn Chew, who used stop-motion techniques in her final-year project, 'Love'. "Besides puppet-making, I am also very interested in stop-motion animation cinematography and set-building, so I've gained a deeper understanding of how to use film equipment like lighting and sets to enhance the aesthetics of a film."

The visit made an impression not just on the students, but on filmmaker Osbert Parker, Lecturer in Stop-Motion Animation at Middlesex – who first met the Aardman team more than 25 years ago after his Middlesex animation graduation film, 'Clothes' was nominated for a BAFTA.

"Aardman is a global brand that represents top quality stop motion character animation; they are world leaders and the very best at what they do," he said. "But at the heart of the studio – besides a very, very large pile of plasticine – is a family atmosphere of like-minded collaborators, directors, animators, model-makers, storyboard artists, producers, runners and wonderful people that bring memorable characters vividly to life, because they all share a deep passion for story-telling through great stop-motion practice."

"Everyone was very excited and knowledgeable in their respective departments," said Pamelyn, who added that the Aardman trip was a highlight of her time at Middlesex. "From the Art Department Director, who added humour in creating the film set, to the Animation Director who delicately and carefully animated the scene and patiently spoke to us about the process and answered our questions, to runners cutting stacks of images for the production schedule and model-makers making hundreds of pieces of [characters'] mouths and heads."

For a look at the work produced by Middlesex's very own future stars of animation, take a look at our 2014 graduate showreel.