The announcement was made on 8 October at the private view of a group show featuring graduating artists from Middlesex University and Goldsmiths, University of London, held in the gallery spaces of London law firm Collyer Bristow.

English Disco Lovers, a project Chris has been working on for two years, combines art and activism and aims to take the 'EDL' acronym away from far-right protest group the English Defense League, subverting the group's hate messages with the positive, egalitarian power of music, dance and disco. Since its inception the project has spawned a wider movement, with counter-demonstrations, public talks, regular charity nights and dance parties held across the UK. 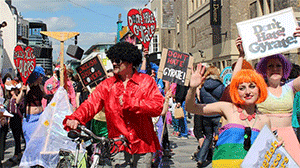 The project also has a wide online following, with 60,000 likes on its Facebook page and 10,000 followers on Twitter – demonstrating the important role collaboration and digital media play in spreading a message, and the influence artists can exercise in a digital, connected world.

"It's pretty overwhelming," said Chris of his win, a prize of £2000. "I've been working on this project for over two years and there have been a lot of high points – this has to be one of the highest. I feel like English Disco Lovers has finally come full circle, back into the art world that birthed it... I don't have any concrete plans for the money, although an MA is on the cards." 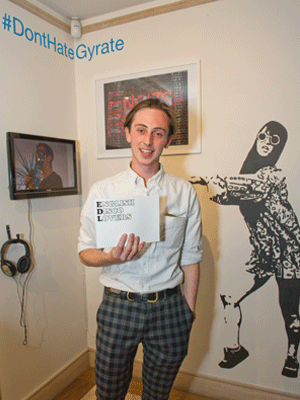 "I was really impressed with the standard of work I was looking at," said Emma Dexter, Director of Visual Arts at the British Council, who judged the award. Emma also praised legal firm Collyer Bristow, who has been championing artists through regular in-house exhibitions for over 15 years, for recognising "the amazing talent we have in this country [and the] incredible institutions we have that produce it. This is one of the reasons why this country is a world leader, both in terms of education and fine art," she said.

Phil Healey, Head of Visual Arts in the School of Art and Design at Middlesex, praised Chris for his success. "Chris has worked incredibly hard and those who know him and his work will agree that he thoroughly deserves the award. His piece is creative, subversive and thought-provoking, using humour and performance to make a serious political point in the nicest possible way. Congratulations are also in order to the Fine Art team in recognition of this success and their drive for academic and artistic excellence."

The exhibition runs from 9 October 2014 until 28 January 2015 at 4 Bedford Row, London WC1R 4TF and is open to the public. Visitors are encouraged to arrange a visit ahead of time to ensure they are able to access all parts of the show.