MA Printmaking students from Middlesex University travelled to France in the summer for an unforgettable stone lithography workshop. Their programme leader and printmaking expert Steve Mumberson reflects on their time in Marcilhac-Sur-Célé. 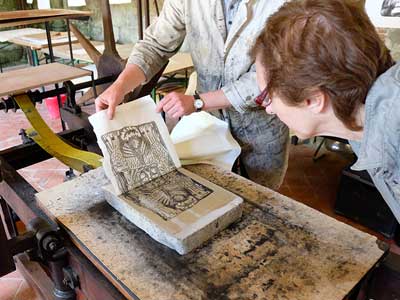 Early in June 2015 I took the fledgling MA Printmaking group to a stone lithography workshop run by Pierre Presse in Marcilhac-Sur-Célé, south-west France. It was conducted in the grounds of the Abbey in the rebuilt vaulted space. The village is surrounded by limestone cliffs, with a good trout river flowing near the Abbey on the outer rim of the buildings composing Marcilhac.

June is rather late for a workshop in lithography, since the background temperature is starting to rise to the heights of 40 degrees and even more in the summer. Heat and stone litho do not mix.

We arrived a week after the international lithography event, Saxa Loquuntur – Lithographie en Plein Air, where artists from Germany, France and England, plus other countries across the globe when possible, spend a period of just over a week producing lithograph prints for a display in the studio space at the end. This happens in the Abbey's salle capitulaire, a space recently rebuilt as part of the ongoing restoration of the Abbey site. 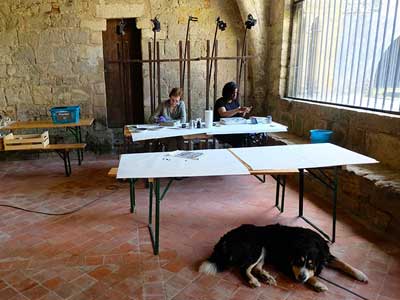 range of what was possible through lithography. For many it was a difficult task, since the drawing up of a stone is very demanding. It is so easy not to be aware of the greasy hand or finger prints that can be left on the surface and therefore the inked stone. Drawing up a stone itself is a skill to be learnt.

Though I had to return early due to university duties with BA students, the students proved to be good and attentive scholars, taking each stage of the process stage step by step, at a pace that allowed questions and greater understanding, yet finding time to lunch by the local stream and visits to the wealth of Stone Age sites and caves in the area.

It is the combination of the landscape, ancient pre-history evidence dotted around the whole area, the very particular fresh local food, the medieval towns, artefacts and art.

It is a full experience which feeds into you without being aware it has happened.