Illustration students and graduates from Middlesex University have brought wartime experiences to life in a new exhibition. 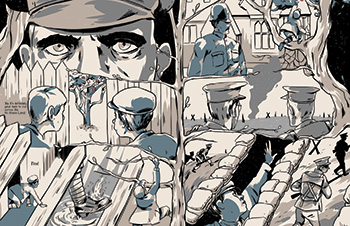 The Bishop's Stortford Museum in Hertfordshire has worked with students from Middlesex University's Illustration course to pay tribute to the centenary of the outbreak of the Great War.

In this unique collaboration – produced in partnership with Hertfordshire Archives and Local Studies and supported by the Heritage Lottery Fund – eight Illustration students and graduates were invited to create drawings inspired by rare police records documenting the experiences of Hertfordshire policemen during the War.

The police records create a fascinating account of what it meant to be a police officer at the time, dealing with matters including shell shock, spying fears, rationing, black outs, desertion and, in one tragic incident, a soldier attempting suicide to avoid returning to the Front. When interpreting these stories into a striking collection of visuals, students had to take into consideration the notion of a society undergoing massive change, challenging the police force to shift its mentality and confront issues it had never previously dealt with. 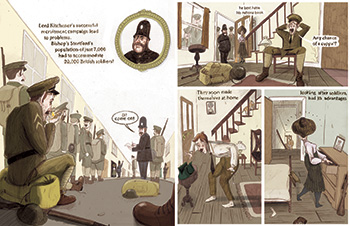 The project was led by Nancy Slonims, Programme Leader of Illustration at Middlesex, who praised the students for their ability to bring to life a sensitive and difficult subject material.

"A live brief with tough and challenging material to work from, this project has demanded respect and integrity due to its subject matter and the fact that these are original police records relating to real people suffering the traumas of the First World War," Nancy said.

"Through their youth and enthusiasm, the students have shown an intriguing approach to an event that took place a century ago. It is both fresh and heartfelt and, in my view, very successful." 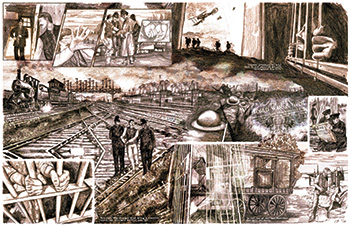 "I think using mediums such as the graphic novel and animation to tackle the stories from Bishop's Stortford allowed us to translate these accounts into something that felt incredibly fresh and easy to connect with. It's been a great privilege to work alongside such a talented group of artists on a project tied into one of the most significant, impactful events in history," said Alex Moore, who took part in the exhibition alongside Kremena Dimitrova, Daniel Duncan, Max Halton, Michael O'Brien, Charlot Kristensen, Taro Qureshi and Salome Papadopoullos.

The full collection of students' illustrations has also been compiled into a graphic novel, available to buy at the museum. You can also view a gallery of the illustrations online in our feature on the Times website.