Illustrator and Middlesex lecturer Paul Barritt continues to cement his reputation as one of British theatre's most exciting names, winning a joint award for Best Designer in this year's Critics' Circle Theatre Awards. 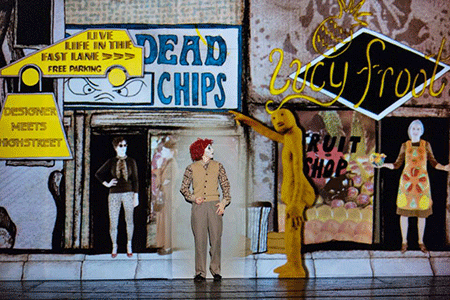 Paul won the accolade for Golem, the latest production from theatre company 1927, which he co-founded in 2005. In his design for Golem, Barritt combines live action, animation, claymation and illustration in an inventive tale of the dangers of consumerism and the pervasive influence of technology on daily life.

With each 1927 production, Paul and his collaborators use a variety of media to create a fantasy world with a unique aesthetic and dynamic. On-stage actors interact with animated stage sets to tell the story. The design of each piece is highly stylised, often looking to the past for inspiration; previous productions have drawn on the silent film era and Betty Boop-style cartoons for their distinct feel.

With Golem, Paul has pushed the style even further. "It's moved into a more collage-like aesthetic, a bit more textured and coloured," he explains. "The world of Golem starts out as a chaotic, organic, interesting world and ends up sealed and homogenised. That was one of the aesthetic journeys of the show; we had to make it as textured as possible at the beginning." 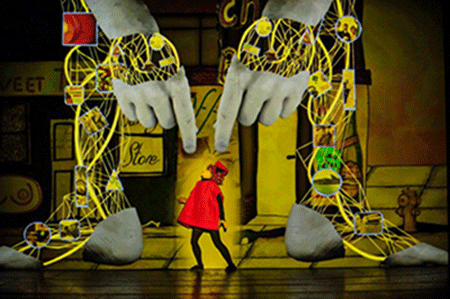 "You have to think of clever ways to bring a story to life, and narrative development is a massive part of the course," Paul says. "Some students end up writing their own stuff and developing their own stories; that side of it gives them a really good, solid grounding to work in lots of different fields."

Paul encourages his students to explore different ways of using their skills, taking the same multidisciplinary approach that has found him such success.

"I think it's really hard to be an editorial illustrator these days," Barritt says. "There are a lot of illustrators out there. But the good thing about Illustration is that it's open to different types of disciplines; you're essentially working to briefs, and it's design-based, so I think it opens you up to a lot of different avenues you can choose to follow.

"An Illustration course is not just about drawing editorial pictures, or even graphic novels or similar; it can expand into all kinds of different things, which is exciting for future illustrators."

Golem runs at London's Young Vic Theatre until 31 January. The production will then travel to Taiwan and Paris.