We put our students at the heart of all that we do. We invest in making physical spaces and environments accessible, adaptable and welcoming. We inspire and foster a real sense of community and belonging through our student experience.

Middlesex Students’ Union (MDXSU) works in partnership with the University to ensure that students feel welcome. MDXSU encourages all students to get the most out of their time here by getting involved in student groups like societies or working together to campaign for positive change.

University as a lifeline 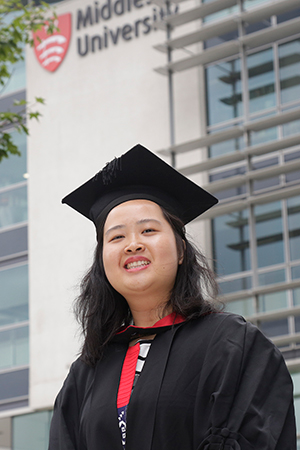 New experiences and new friendships opened up to international student Tianmei Zhou at Middlesex. Then they became a lifeline to her.

For many students wearing the mortarboard and receiving their degree is a special moment. But for Tianmei it was far more than that. It was an achievement she hadn’t thought possible after a terrible car accident left her in a coma and unable to speak or walk a couple of years earlier.

Tianmei arrived here from China to study Business Management. She was living in Hendon and loving the course and life in general. A keen student, she made many friends while studying in the Sheppard Library and on her course. But it was taking part in the Equality, Diversity and Inclusion (EDI) class that really enriched her time with us. “Middlesex gave me so many extremely unforgettable experiences,” she reflects.

Tianmei attended an event at City Hall celebrating the 50th anniversary of the Race Relations Act where she met and formed a friendship with singer Patti Boulaye. Both Patti and EDI class tutor Dr Doirean Wilson were to become important figures in her life. They stepped in to support Tianmei after the accident, helping her on the road to recovery and her transition back to university for her final year.

“I consider them as my life tutors because of the help they gave me after I nearly lost my life,” she says.

Students’ Union of the Year 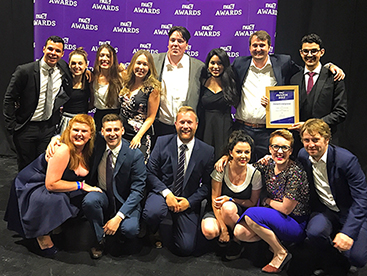 Becoming the first ever London university to be named Students’ Union of the Year at the National Union of Students (NUS) Awards is no mean feat and down to the innovative work our Students’ Union has been doing in recent years.

Ben Edwards, President of Middlesex Students' Union (MDXSU) in 2017-18, says he was very proud to be recognised by the NUS at the 2017 national awards and believes it was due to the significant transformation the Union has undertaken over the last five years.

“Our focus on the diversity of our student body – in terms of both their demographic and academic diversity – has meant we've been able to take steps to modernise and develop a strong vibrant democracy," says Ben.

"We represent every student on every course, in every school. We champion equality and diversity across our community.”

Ben highlights some initiatives led by MDXSU, including a sector-leading partnership with Citizens UK. It has also launched a student-led community kitchen on campus, continued to develop and expand a pioneering student internship delivery model, and established a new community placement scheme.

Not willing to rest on its laurels, Ben says MDXSU’s mission is to be the most innovative, inspiring and inclusive students’ union in the UK by 2020.

“We want to deliver students what they deserve – a modern, thriving student community rooted in their experiences, in one of the most diverse parts of London.”

The Ritterman, one of our most exciting buildings, opened its doors in 2017. The £18 million five-storey centre is home to a number of departments from Robotics and Mechatronics to Dance and Interior Design. Its break-out spaces and specialist studios allow for both formal and social teaching to take place. It’s here where designers meet programmers and new ideas come to life. The building also boasts the largest living wall in Barnet with 3,500 plants that help to improve London’s quality of air.

Our strategy: Transforming potential into success

5. Research that benefits our students

6. Driving support for our mission

Read more about our direction and objectives to 2022