We offer an inspiring and diverse choice of courses and options to suit every student – from traditional three year degrees to foundation courses and apprenticeships.

Santander is proud to partner with Middlesex University, working together to make education truly accessible and meaningful to all. We offer generous scholarships to enable Middlesex students to access a wide range of subjects and qualifications. We also provide funding for specific projects to enrich and inspire student experiences enhancing entrepreneurship and post-university employability. 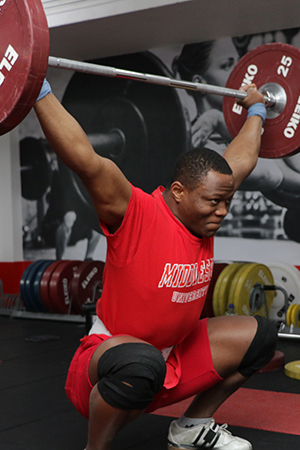 Fighting spirit is something student Cyrille Tchatchet II knows all about. Cameroon-born Cyrille didn’t follow a traditional route to tertiary education but that only made him more focused when he made it to Middlesex.

As a champion weightlifter, he arrived in the UK in 2014 to compete for his native country in the Commonwealth Games. He applied for asylum as a refugee and began his long fight to remain.

Finally, in 2016 he received permission to stay and immediately applied for a place through clearing for Middlesex University’s BSc Nursing (Mental Health), a step towards realising his ambition to become a mental health nurse.

Cyrille was awarded a full sports scholarship and now combines study with weightlifting training at the University.

Cyrille hopes to compete in the next Commonwealth Games but his refugee status excludes him from entering. Not one to give up lightly, Cyrille is working with British Weight Lifting and his coaches to petition the organisers to allow a team to compete under a refugee flag. He’s positive it will happen.

Then there’s the small matter of his other aspirations. “I want to compete at the Olympics, then complete a Master's." 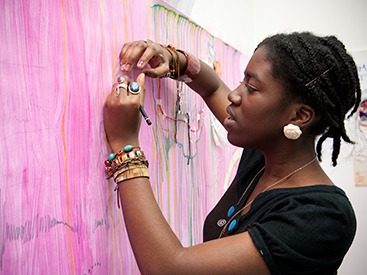 With young people often lacking the right information to make important decisions about their future or simply being overwhelmed by the sheer amount of choice, our Education Liaison and Outreach team is up against a lot of challenges.

The team set about creating a compelling campaign to start an ongoing conversation with school children from an early age.

It needed to engage and support young people to develop their academic, transitional and life skills. We want Middlesex to be seen as a valuable partner in making life decisions and the place to realise their potential.

Aimed at students aged 11 to 16, the Make Your Mark campaign was launched on our campus with a somewhat unusual event. A group of local children were invited to create a street art mural, working alongside an established graffiti artist. It demonstrated the importance of creativity and the possibility of non-traditional pathways to higher education.

A whole range of fun and engaging information which aims to ignite intellectual curiosity in school children and raise their aspirations to go on to higher education is available across a variety of digital media channels.

The well-received campaign includes information for teachers, parents and carers too. This pioneering campaign has been well received by the Department of Education for the way in which it presents both vocational and academic opportunities to young people in an innovative way.

Upskilling the workforce of the future

We have a long tradition of partnering with business to shape higher and degree level qualifications. Middlesex University London introduced the first Business degree 50 years ago and since then we have continued to work with a wide range of businesses; Worldpay, Consalia and Mitsubishi, to name a few.

We collaborate with industry and the public sector to develop higher and degree apprenticeships, corporate degrees and work-based training programmes that help fill the UK’s skills shortages.

Our strategy: Transforming potential into success

5. Research that benefits our students

6. Driving support for our mission

Read more about our direction and objectives to 2022