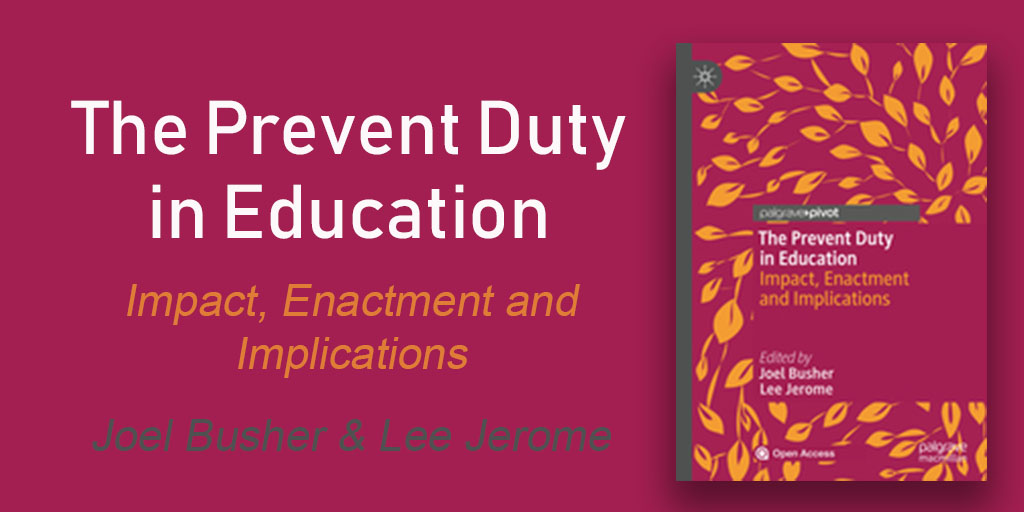 In July 2015, the UK became the first country to legally require those working in education to contribute to efforts to ‘prevent people from being drawn into terrorism’.

“This invaluable book brings empirical rigour to a debate that is too often emotive, polarised and selective in its approach to the facts. By examining how the Prevent Duty is enacted in practice, the authors provide a sound evidence base for future policy development.” David Anderson QC, House of Lords,

Given the ongoing review of Prevent, and the often highly polarised public and policy debate around the policy, the academics recognised the need for a detailed understanding of how this policy is playing out in statutory educational settings.

The pair drew together six separate research projects, spanning the full five years since the introduction of the legal duty, involving more than 1,000 respondents in total, including staff, young people and children, from early years settings through to further education.

Their conclusion from teachers' and students' lived experiences of both the Prevent Duty and the requirement that teachers promote fundamental British values in schools, is that at least some aspects of the policy need to change.

Joel said: “The book makes clear the importance of getting beyond high level policy analysis to look at how policy is actually working on the ground, for better and for worse. This is particularly true with contentious policy areas, such as Prevent.

“While the Prevent duty was quickly ‘normalised’ in many schools, it clearly has had an impact, and these are not always the impacts that were intended or expected.”

Lee added: “Because there are concerns among professionals and young people about the way the policy is experienced by BAME people (especially Muslims), we recommend there should be a greater emphasis on interpreting the Prevent Duty through the Equalities Duty, for example through equalities audits.

“We also suggest the government review, and local providers, explore alternative ways to frame teaching for democracy, equality, the rule of law and toleration.

'This reflects concerns among some professionals and young people that the current policy requirement to ‘promote’ the fundamental British values leads to a distorting focus on Britishness and identity.

“We also recommend that providers should pay careful attention to the selection and use of educational resources, some of which perpetuate stereotypes and simplistic narratives about extremism.”

David Anderson QC, House of Lords, and former Independent Reviewer of Terrorism Legislation, believes the book can make a difference.

He said: “This invaluable book brings empirical rigour to a debate that is too often emotive, polarised and selective in its approach to the facts. By examining how the Prevent Duty is enacted in practice, the authors provide a sound evidence base for future policy development.”

* In additional comments Lee Jerome, whose background and research is in citizenship education, explains in more detail how the Prevent duty can 'alienate' BAME students.