"Middlesex made me the way I am today," says Strength & Conditioning graduate Jerry Okoye, who is about to open his second sports injury clinic in Chelsea 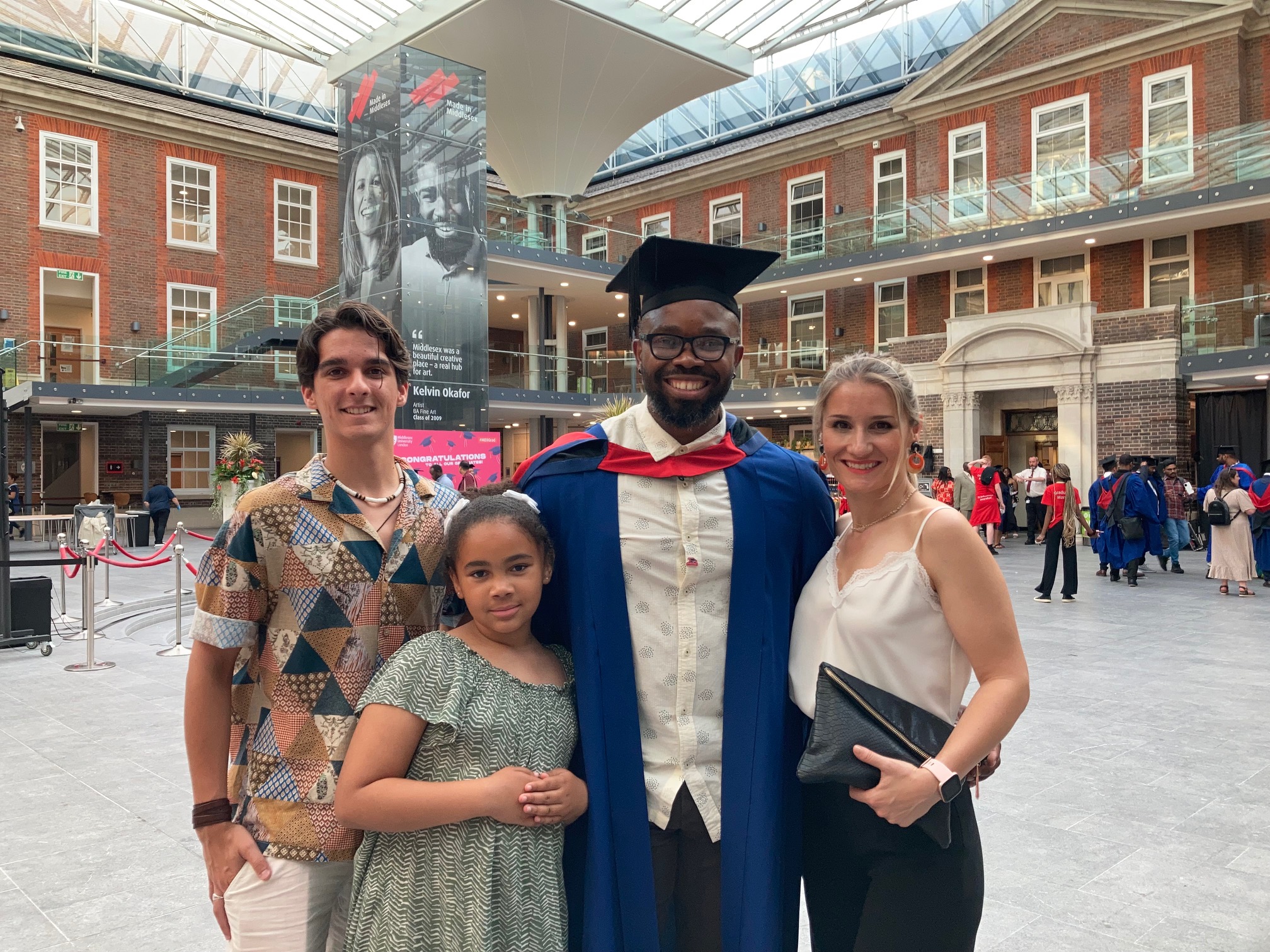 2021 MSc Strength & Conditioning graduate Jerry Okoye was overcome by “tears of joy” at the end of five years of study for his Bachelors and Masters at MDX and a gruelling experience during the pandemic.

Having volunteered during the first lockdown both as a domestic at the Royal Free Hospital and as an emergency responder in the community, he received a text message telling him to shield because of an underlying auto-immune condition.

Returning to his MDX graduate partner Marta, stepson and daughter with orders not to go outside, Jerry focused on improving his own fitness, delivering spin and bootcamp classes online and preparing to set up a sports injury clinic as soon as lockdown ended.

He launched JMFitClinic in Wood Green in 2020 and is about to open a second clinic in Chelsea.

He was deeply relieved, he says, to have completed data collection for his dissertation before restrictions came in.

One of his placements on his Masters programme was at NFL Academy at Tottenham Hotspur’s new stadium, where he worked with American football superstars like Odell Beckham Jr. Another was taking care of participants in the London Marathon, dispensing a pre-activity massage regime and post-race recovery routine. 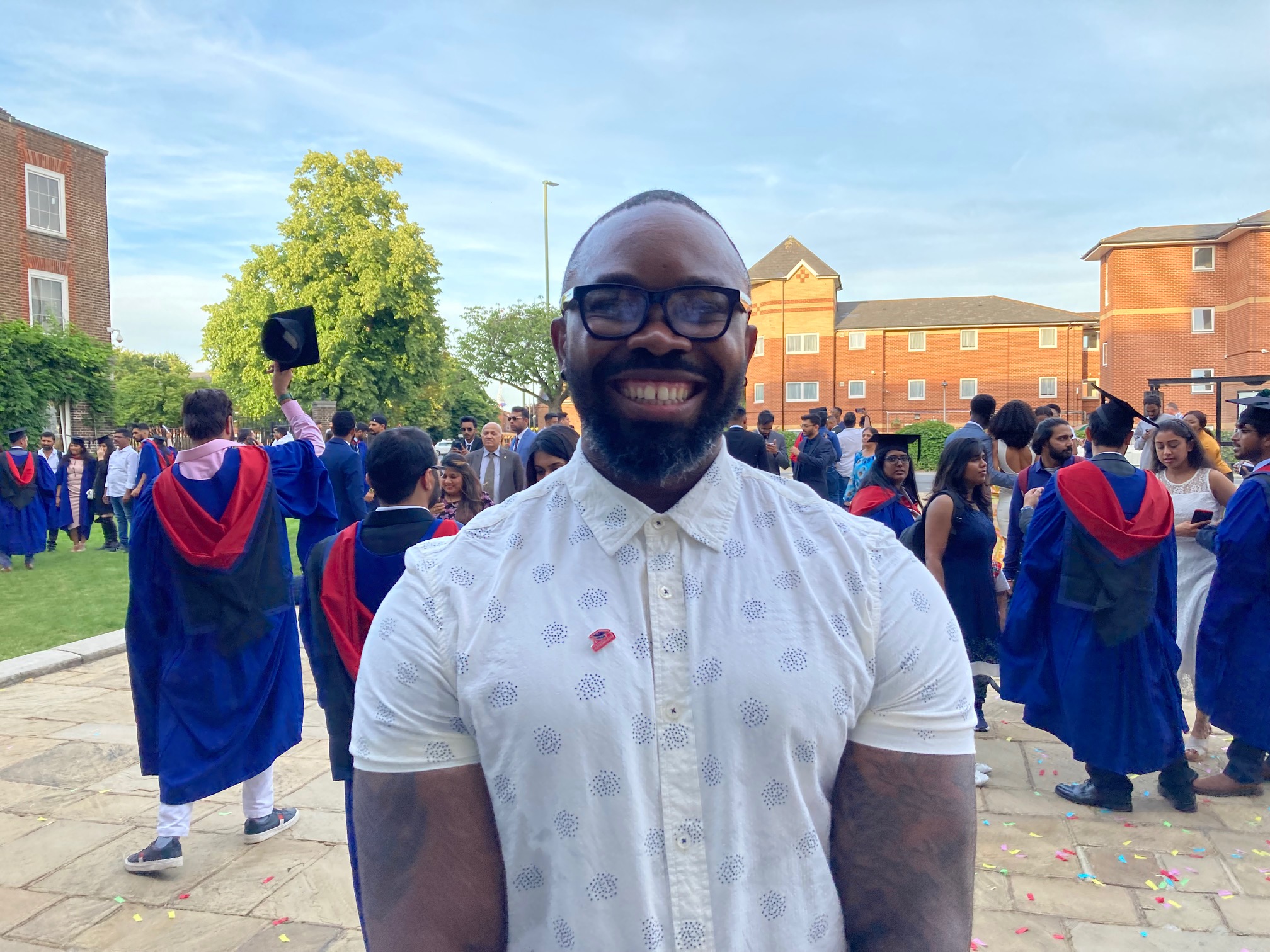 “It was awesome,” he says. “We treated people one after the other. Some students came there with very little knowledge, and left with huge experience”.

He values the interchangeable skills involved in being a sports injury therapist, integrating his work with working professionals in different disciplines.

While at MDX, he won awards for Overall Student of the Year and Student Voice Leader of the Year; an SLA Contribution Award; and a prize for Outstanding Contribution to the Faculty of Science & Technology, presented by then-Executive Dean Professor Sean Wellington.

He thanks his lecturers – “super, super, super-intelligent people… Part of the reason I come here happy is I look at them [and] I feel I want to get involved more, I want to be like them” – his coursemates, "every one" of whom has contributed to his life, and head of department Dr Rhonda Cohen.

He has relished being an entrepreneur, despite the sleepless nights, but would also “100%” like to come back to MDX to do a Sports Science PhD. “I'm already contemplating it. It's only a matter of time,” he says. 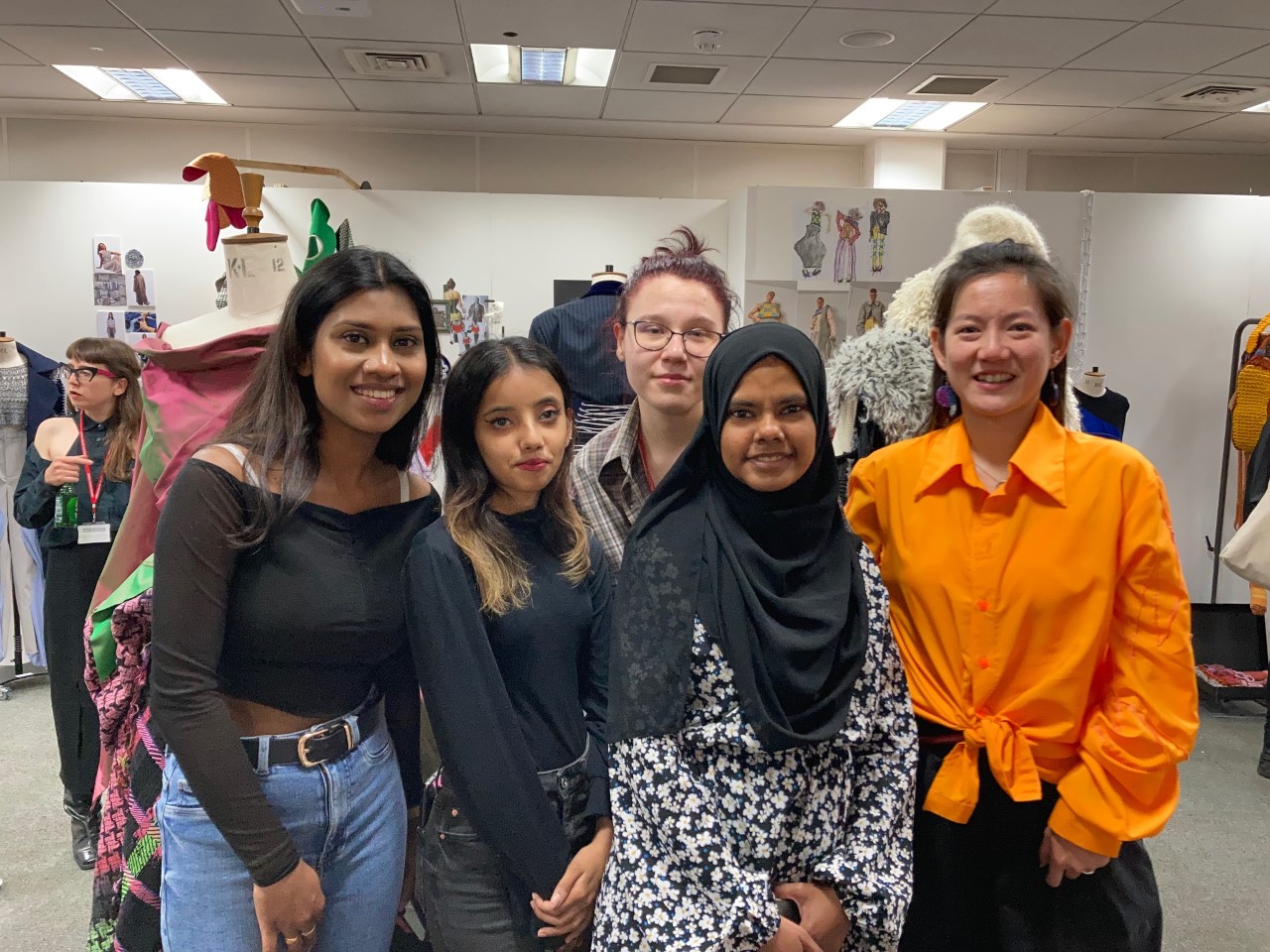 Fashion Textiles and Design graduate Ivy Ct Yu has faced more obstacles than most during her degree as she balanced studying with working part-time and raising her young son.

The 36-year-old, who moved to London from Hong Kong in 2014, says Morrissey, three, has been her motivation throughout the course and she makes clothes for him as well as creatively patching up old ones.

“I entered a competition called Alter-Eco which is a national vintage upcycling competition by Goldsmiths [University of London]" said Ivy. "The garments I used to make that windbreaker were vintage deadstock and inspired by Morrissey.”

Ivy’s final collection had a strong emphasis on sustainability, working closely with a knitting factory and using only deadstock Merino yarns to create tailored jackets.

“Every day I can see how much waste there is" she said. "They are just lying there ready to be chucked away but they can be stunning.

“If you can find a way, there is always a way to re-use things and think outside the box.” This ethos led to Ivy using melted bottle caps and fruit nets to make all the buttons for her garments after taking part in a jewellery workshop.

“They look really gorgeous and everyone loves them," she said. "Because I have mixed so many colours inside, nobody can tell what they are made from".

Ivy admits to finding managing both a full-time degree and motherhood challenging at times.

“Our course is really intense - full time plus work at night,” she said. “My good time-management and organising skills developed throughout my life help me a lot in juggling.

“The hardest thing is fighting with the sleepiness since I always have to work until midnight.”

Ivy thanks MDX's technicians for helping her while studying during the pandemic. “They are always supportive and I know I wouldn't have finished my last year without them," she said. 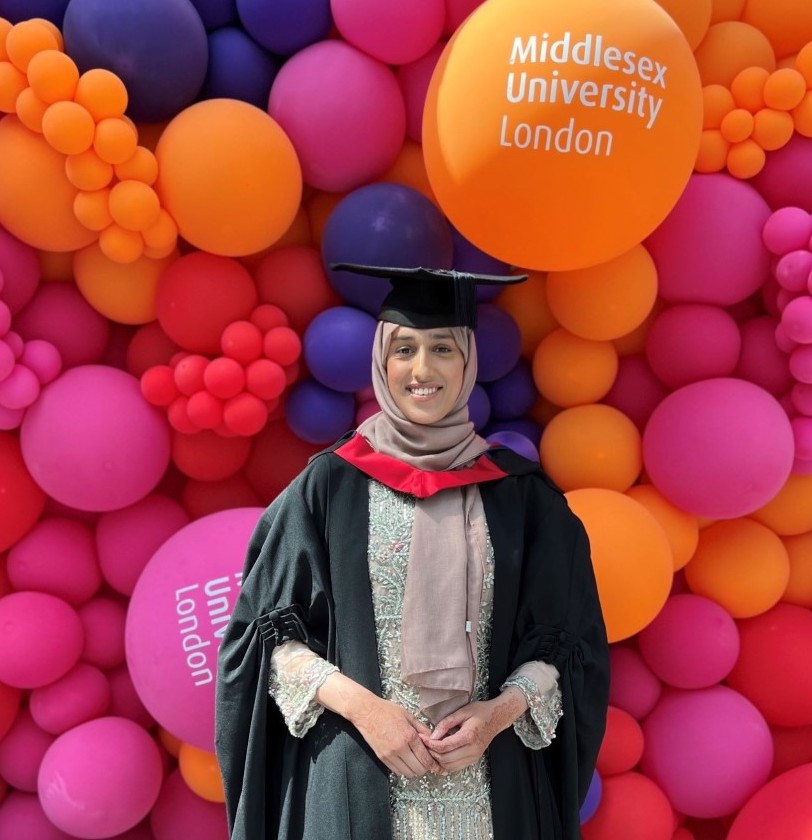 Studying at Middlesex University has been a life-changing experience for Midwifery graduate Aqsa Rabbani, who was diagnosed with traits of autism aged 17 and was extremely shy around other people.

“I have flourished, it’s like a miracle, I don’t recognise myself from the person I was seven years ago,” she said.

Aqsa was awarded an MDX Community Scholarship which included grants of £2,000 per academic year and as part of the scheme has been representing the university as an ambassador, which she describes as the “best thing ever”.

Recently Aqsa was named Student Ambassador of the Year by Uni Temps.

Having been on placement at Barnet Hospital while studying, Aqsa now works at the Royal Free.

As well as leading to a First Class degree, Aqsa credits her time at MDX for transforming her confidence and social skills.

She said: “It’s extra special to graduate because I’ve been through a lot of my life.

“Because of Middlesex I am the woman I am today. I’ve gained the social skills I needed to become an effective midwife and compassionate individual.

“Growing up I was very apprehensive so graduating from Middlesex is such a beautiful feeling because I thought I’d never graduate from university.

“This university and campus has helped me change so much, everybody is so friendly. I felt like I was part of a family.” She thanks her family for all their support while she was studying.

Matthew Roze, from Stanmore, came to MDX via direct entry into the third year of BA Theatre Performance & Production, after studying on courses with LAMDA.

As someone with dyslexia, who had once been told that he would never get to university, he found MDX lecturers and tutors "beyond helpful, incredibly nice... They knew how to talk to me, they would leave it to me until I asked. I’ve never had that, ever". 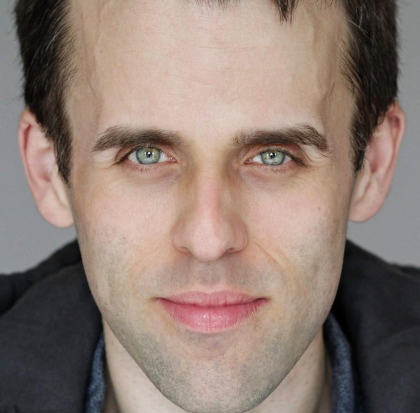 During his time at MDX, when he also had caring responsibilities, Matthew set up a workshop programme called The Neuroclusive Project.

Originally he thought this would be aimed at neurodivergent students to help them learn through drama, but he soon realised it could offer "life skills for everybody" - such as people who speak English as a second language. One coursemate congratulated him for hitting on an overlooked area.

He also won a placement to do drama facilitation with teenagers at artsdepot, as part of the National Theatre's Connections programme.

This culminated in a production of Like There Was No Tomorrow, a play about global warming from a young person’s perspective. Holding workshops to help the actors with character development gave him confidence that he could make a career in this field.

Looking ahead, he hopes to keep performing in some way.

"Whether you have a learning difference or not, whatever someone thinks of you, it doesn't matter: you shouldn't have to feel you’re the odd one out," says Matthew.

"That’s what I want to bring to my workshops and classes. I’m going from my own experience and turning it positive".

Graduation continues this week, with students who were unable to attend ceremonies in 2020 and 2021 because of the pandemic, collecting their degrees.