Changing the Game, crime and violent gangs in Chicago.

Gangs have played a significant role in driving high levels of violence and criminality in Chicago for almost 50 years. Groups such as the Gangster Disciples, Vice Lords, and Black P Stone Rangers, have become an embedded feature in most communities in Chicago’s South Side and West Side. A 2012 Police Department Gang audit conducted in 2012 estimated the existence of 650 gang factions and roughly 70,000 gang members in Chicago. 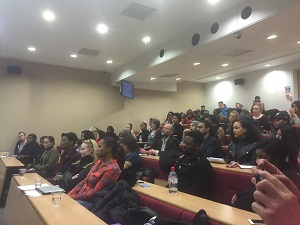 Middlesex University hosted a seminar on 23 March 2016 which offered an opportunity to gain an insight into the nature of gangs and violence in Chicago, as well as the key needs and issues associated with gang members and gang affected communities in the city. With gangs emerging as an issue in London and other English cities over recent years, the event provided allowed comparison of experiences in London and Chicago, and consideration of what lessons can be learned for agencies and academics in the UK.

The seminar was run by Dr Simon Harding and Paul Kassman and began with a screening of the documentary Crack House USA.  The documentary follows the story of Titanic Stones gang members who were involved in drug dealing and a spate of shootings in Rockford Illinois. The film engages with the families of the gang members, and offers a first-hand look at the impact of drugs, crime and incarceration in gang affected communities.

The guest speakers who attended were: