JKU as a partner in the Erasmus+ project GIRDA conducted a study with seniors in the summer of 2017. Playing games on tablets should inspire digital adoption in elderly with no or only little experience with digital media. Their learning processes and difficulties have been observed and analysed to establish a sound data base for the creation of learning support materials.

For this first study, we have been interested in older people without prior experience in using digital technologies. The Association for Elderlies in Upper Austria (Oberösterreichischer Seniorenbund) as partner organisation represents a large number of active elderly members. We called for members without experience with touch screens. We could finally select 20 members who indicated to have no digital preoccupancy. They were 15 women and 5 men between 57 and 87 years.

Seven pairs and six single players attended playing sessions at our office during summer 2017. The participants had to play three different games on a tablet (iPad Air 9.7 inch). They started drawing a picture, followed by completing a puzzle, and finished the session enjoying the game “CandyCrush”. In the beginning of each session, we introduced to them the setting including the game to ensure that they are aware of the tasks to be accomplished. While explaining the usage of the tablet and the rules of the game, we demonstrated the gestures they needed to play.

Each of the sessions was documented by 2 video cameras. The first video camera had its focus on the tablet and the interactions with the fingers, and the second one captured the entire body of the gamers in way we were finally able to analyse the body language. We also interviewed the gamers after they had completed a game.

The following first findings are based on the analysis of the video clips. The analysis was guided by the so-called thematic analysis. This method is “independent of theory epistemology” and “provides a flexible and useful research tool, which can potentially provide a rich and detailed […] account of data” (Braun & Clarke, 2006, 78).

In case pairwise gamers were couples, they were usually cooperating while playing. And they talked a lot about the tasks in the course of playing. Furthermore, they switched roles regularly while playing. Thus, working in pairs on a single tablet seems to go along with cooperation activities. We could hardly observe independent activities in sessions with pairwise players. In general, they gamers seemed to be deeply engaged while playing and had a lot of fun.

The data shows that failures of motor control occurred most frequently at the first task “drawing”. Some gamers had problems with swiping the toolbar and tapping exactly. Few participants used fingernails, which also led to problems with dragging and tapping. In general, the learners made more errors than failures of motor control. The issue “errors” is triggered by different reasons which are all related to the usage of the tablet or the rules of the games. For example, a lot of pairs tried to drag or tap simultaneously on the screen, and some gamers placed some fingers unconsciously on the tablet surface to fix it in its current position. Both errors led to problems with dragging or to unconsciously performing a pinching gesture (as usually used for scaling content on a tablet). The videos show that several participants repeated these mistakes without realising the actual cause of the problem until the end of the game.

Depending on the problems of the gamers, the facilitators were demonstrating the usage or the gestures by explaining or showing them. Encouragement for not giving up to play was important for some single gamers, while couples usually motivated each other to continue. The data indicate that the participants preferred asking the facilitator instead of the partner. Although the video clips show almost no active request for support from partners, we could observe several support activities by the partner participants. They often tried to help each other by explaining or showing after recognising the need for help. Sometimes the support activities were not helpful due to incorrect advice.

In general, the facilitators usually helped gamers once 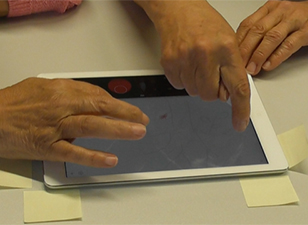 they asked for support. The facilitators were not able to observe the actions of the gamers in detail because they didn’t sit next to them. Only three single gamers had shown such strong signs of uncertainty that a facilitator decided to sit down aside them. The video clips show that the physical distance between the gamers and the facilitators caused problems in cases of errors or failures of motor control: On the one hand, the facilitators often didn’t realise which problem had occurred because they hadn’t been able to observe the actions of the gamers from their position in the room. On the other hand, some participants repeated making mistakes several times until the end of the game without recognizing which mistake they made. In these cases, the facilitators couldn’t provide the necessary support, which finally led to suboptimal learning outcomes. In these cases adequate help could have led to more effective learning processes, and might have avoided generating negative attitudes among the gamers. Therefore, the facilitators should probably observe the actions of the gamers in more detail to identify actual needs of individual gamers. The provided support should enable elderly gamers to continue (inter)acting with tablets autonomously. It appears to be important that the facilitators help avoiding frustration and repetition of mistakes, in order to trigger more successful learning processes.

We are conducting a second round of analysing the video data for examining the support needs of elderlies in gameplay-based learning situation in more detail. In addition, we do telephone interviews with participants of the first study to find out whether and how they changed their attitude and behaviour in using touchscreen-based devices since participating in the study. Finally, we are planning a longitudinal study to create an extensive data base for the generation of support materials for gamers and facilitator education.