Middlesex University is the lead research partner in the GIRDA project and is working closely with its UK partner Good Things Foundation.

Good Things Foundation is responsible for managing the Online Centres Network with over 5000 Community Centres and the Learn My Way learning platform supporting over 2 million people. They identified a community project for older people in north-west England around Stockport where we recruited many of our 40 participants. We have also approached two London based projects for older people which formed part of our pilot studies, and a further group supporting isolated older women. 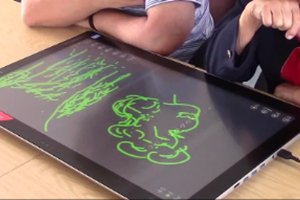 The plan was to use our table top sized touch computer and invite participants to play games that would introduce gestures such as drag, rotate and flick. The participants generally worked in pairs and the interactions were video recorded.

The games selected were a drawing activity, a jigsaw puzzle and either Solitaire or a beetle game that involves flicking the beetle onto a target. Candy Crush was available to use as an option if there was sufficient time and interest.

Our 40 participants have an average age of 75 years and 27 are women. Although we requested no or minimal prior experience we subsequently found that some people had prior experience of desktop computers and mobile phones. Our research approach is qualitative, a small sample of the recorded sessions were assessed by three researchers leading to the development of issues categories. Here are a number of issues identified in the subsequent analysis.

Most of our participants started with the drawing activity and this had mixed levels of success. At least two couples had very successful interactions, asking lots of questions, pursuing different colours, types of brush, and backgrounds.

One person revealed he had been a signwriter and drew a very detailed plane. However, least two participants expressed concern over their poor drawing skills and some people struggled with the idea of 'just draw something’.

Cognitive load as a distraction from learning

The aim of the game-based learning strategy is to create non-stressful, enjoyable paths to learning cognitive motor skills.   Using Solitaire, where players already know the game rules it is effective in teaching tapping, dragging and placement.  Where players do not know the rules we have seen evidence that it disrupts the flow of learning. Two people with no prior knowledge of Solitaire and very weak digital skills clearly struggled through this activity.

In a number of sessions that participants would spontaneously collaborate by sharing responsibilities in task action:  for example in the jigsaw activity  one participant would plot the route or clear obstacles while the other dragged the piece,  and another would make ‘air gestures’ to guide their partner.  Other games such as Beetle enforced turn-taking and created competition.

Prior experiences can impact on attitudes to learning as discussed in the technology acceptance models and the Theory of Reasoned Action.

The participant declared that she had negative experiences from a small number (2-3) of ‘conventional’ introductory classes.  She cited the lack of an instruction manual and cast doubt on the likelihood of her ever wanting to adopt digital skills.

The first evidence of change came during the freehand draw when she remembered a positive attitude from a long forgotten technology used previously:

This is smashing, it’s like one of those etch-a-sketch things.

Later in the session having had some success mastering the Jigsaw and engaging with the Beetle game she was moved to make a further positive expression:

This can be interpreted as her being reminded of a forgotten attitude with a belief strength and evaluation that supports the persuasive goal.

At the end of the session she remarked on the Beetle game:

I quite like this game. Can I take it home, it’s fun.

The success of this session is that the experience has both drawn out latent positive attitudes towards herself and also weakened the negative attitude towards computers that she had brought to the session.

The use of games as a learning activity has raised a number of issues for discussion with the GIRDA project partners and a further round of analysis will follow. This will be used both to develop a theoretical framework, and to support the creation of a mentors advice pack.