Dame Janet, our Chancellor, is a prominent academic and musician with a global reputation as a champion of the arts. She acts as a ceremonial figure-head of the University. Dame Janet has an important ambassadorial role in representing the University to external audiences to help build support for our mission. 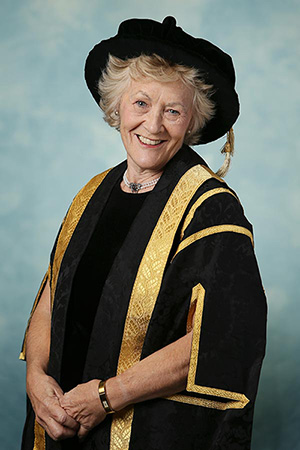 In 2013, Middlesex University was proud to hold the inauguration of our third Chancellor Dame Janet Ritterman. Janet is an eminent pianist, accompanist and academic, who was appointed DBE for her services to music in 2002 Queen's Birthday Honours. Her impressive background in pedagogy and far-reaching research made her a natural choice for this important position.

A former Director of the Royal College of Music London, where she is now a Vice-President, and a former Principal of Dartington College of Arts, Janet has brought a wealth of experience to her role as Chancellor.

As pianist and accompanist, she specialised in working with singers, in chamber music performance and in the training of gifted performers. Alongside her activities as performer, Janet was from the outset committed to teaching and to research. She has produced national reports on orchestral provision and opera training and has delivered addresses on music and music education at national and international conferences. She remains engaged in research into aspects of music pedagogy and repertoire.

Janet has taught in universities, colleges, schools and Saturday music centres, and has designed and run undergraduate and postgraduate courses in music and in music education. Her first post in higher education was at Middlesex, where she joined the staff in 1975, and contributed to the development of the BA in Performing Arts, the first such course I the UK, before moving to Goldsmiths, where she designed and led the first Masters degree programme in Music Performance.

In the course of her career, she has served as an adviser, reviewer and external examiner for numerous institutions in the UK, in Australia and New Zealand and in several European countries. Her relationship with Austrian higher education in particular has been long standing. When the Austrian Government established its Science Council to advise on higher education, Janet was appointed as a founder member. She subsequently became the first Chair of the international board for Austria’s national Research Council programme for research in the arts. In 2016, in recognition of her services to Austrian higher education and cultural life, Janet was awarded the Austrian Ehrenkreuz (1. Klasse) für Wissenschaft und Kunst. She continues to serve on several trusts connected with music, the arts and education and is Chairman of the Anglo-Austrian Society, a grant-giving charity which promotes cultural and social exchange and dialogue between the United Kingdom and Austria.