The skills I gained by studying at Middlesex have enabled me to travel the world, go to Grands Prix and meet all sorts of people. It’s become quite an exciting life and I wouldn’t change it for the world.

Richard Fox remembers his student days as a time of inspiration, experimentation and opportunity – the perfect grounding for his prestigious career as a silversmith. Richard was also an Associate Lecturer at Middlesex for seven years.

“Today, we’ve made some Rolls-Royce Spirit of Ecstasy emblems and are sending them to be hallmarked. I do a lot of work for Rolls-Royce, including bespoke interiors for their cars. We’ve also just completed the trophies for the Azerbaijan Grand Prix.

“My association with Formula 1 is one of the things I’m most proud of. It started in the 80s when the CEO, Bernie Ecclestone, was looking for a young designer, which I was in those days, to design his trophy. Six people were put forward and I got the job. My training at Middlesex had given me the confidence to rise to a challenge like this and the maturity to take on a large project. Another proud moment was being chosen to design the University’s first-ever mace. 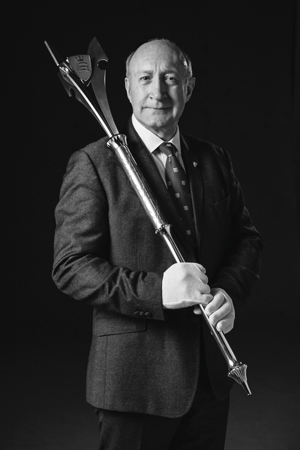 “I’d chosen to study for a BA in 3D Design because of the diversity of the course. I wanted to learn and experiment. The course gave me the opportunity to work in lots of different mediums. You were encouraged to really stretch your wings at Middlesex.

“We had such a good range of tutors. They weren’t just silversmiths, they came from all different walks of the craft industry, including visual research, history and fine art. It was a great melting pot of ideas and gave us a huge spectrum of views, which all added to our design process.

“That’s why it was great to go back and work as a lecturer in silversmithing. I loved seeing so many students develop a passion for their work at university and go on to have great business success.”

“When I first set up my workshop, in 1982, I did everything – I was the designer, the craftsman, and the salesman. Now, my wife Serena and I run a substantial design and manufacturing business with 14 employees, including apprentices.

“I’m passionate about supporting the next generation of silversmiths. I remember it was difficult to get started when I left college – it was a very traditional industry back then. It’s opened out a lot now. My company has an open-door policy where we’ll show students round our workshops any time.”

“I’d say to today’s Middlesex students: ‘Keep asking questions and don’t stop at the first answer. Continue to seek more information and guidance – practical and aesthetic – and analyse everything. Remember, your thesis is really important. It gives you a different way of thinking and experience of analysing things.

“I travel the world, go to Grands Prix and meet all sorts of people. It’s become quite an exciting life and I wouldn’t change it for the world. I’m still learning so much. That’s what you do as a designer. You never stop learning.”

As a past student, it was an honour to be asked to design the mace.

At over a metre long, weighing five kilograms, and featuring intricate designs of gold plate, red garnet and titanium, it’s hard to imagine our ceremonial mace started life as a sketch on silversmith Richard Fox’s notepad.

“Like anything I make, it began with pencil and paper,” says Richard, an alumnus, former staff member, and one of Britain’s leading silversmiths, known for creating Formula 1 trophies and bonnet ornaments for Rolls-Royce cars. 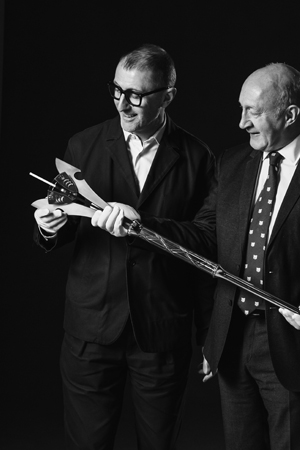 “As a past student, it was an honour to be asked to design the mace. Everything about it is home-grown, including one of the metals used, Argentium, which was invented by Peter Johns, my former Middlesex tutor.”

Representing the past and future

University Chancellor, Dame Janet Ritterman, kindly donated the entire amount for the mace to be designed and created. The brief was developed by Gareth Williams, Head of the Department of Design. He wanted it to be symbolic of the county of Middlesex and the University.

“The mace had to be classic and have gravitas, but also a freshness,” says Gareth. “We wanted to acknowledge 150 years of our history as well as representing Middlesex as a forward-looking institution.”

Features on the mace include an enamel globe, to represent the international reach of the university; three seax blades, an ancient weapon of the Anglo-Saxons, representing the county of Middlesex; and intertwined ribbons recording the names and dates of our predecessor colleges.

It was made using a combination of traditional silversmith techniques and computer-aided design – reflecting the way the university embraces both traditional crafting methods and cutting-edge technology.

Richard was there to see the mace unveiled at the 2018 summer graduation ceremony. “I was very proud to see the mace in action,” he says. “It’s a striking symbol of the university’s history – and future.”