Understanding there were many different views in the world – and how to listen and try to understand those views as well as share my own – set me up for life.

Commercial litigator Nik Rochez recalls his student days at Middlesex in the Seventies as stimulating, character forming and opening his eyes to the world.

Booking the Sex Pistols to play at the Students’ Union for the modest sum of £75 is one of Nik Rochez’s defining student memories. The commercial litigation specialist was clearly a keen negotiator even back then.

“The Sex Pistols broke between the time we made the booking and the time they arrived for the gig. It was an interesting evening. We really didn’t know what we had booked. It was a bit of a shock for many of us. And they weren’t terribly happy about being here for £75. They made that quite clear!” he says.

Nik studied law at Middlesex Polytechnic in 1974, the first year that it offered a law degree. It was second time lucky for Nik who reveals he enjoyed the social side of student life “far too much” at a prior university and was asked not to return.

“Let’s just say that I had not performed well elsewhere,” he says cryptically. “So Middlesex was a second and final chance for me. And I'm very grateful for that chance.”

Happily Nik settled in well, finding a diverse crowd of friends, working as deputy editor on the student newspaper and buckling down to what was a stimulating course. He recalls Brenda Barrett, Emeritus Professor of Law, and Professor David Lewis (who is still with the University) as being standout tutors.

“They really made law make sense to me. I enjoyed their classes immensely. David’s in particular because he’s an employment lawyer and I found that a hugely interesting area. In fact, he supervised my dissertation on company board structure, a subject which has flowed through the rest of my career.”

“Almost from the start of my training I did litigation and was running fairly substantial caseloads before the end of my training period. That gave me a big start in my career,” he says. 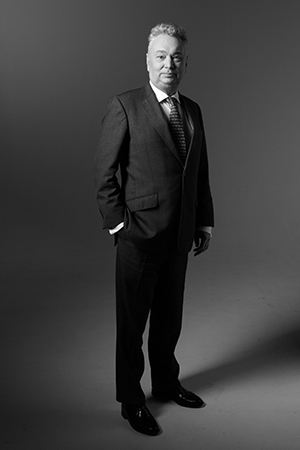 He stayed at DAC for 21 years, becoming managing partner at just 32 and building a reputation in commercial litigation for insurers. He’s since acted on numerous high profile cases including the Hillsborough disaster, the successful defence of a director in a dispute with Sir Elton John, the collapse of Equity Life and Northern Rock, and negotiated Lloyds' response to reinsurance claims following the World Trade Centre tragedy.

“I've had the privilege to be involved in a considerable number of high-profile and important pieces of litigation acting for insurers,” he says.

Nik’s current CV makes for impressive and exhausting viewing – he is a consultant at Hill Dickinson LLP, where he was a partner until a few years ago, and has a portfolio of non-executive director roles, including chairing the Risk Committee at Aviva Insurance. He chairs the Royal School of Needlework and until recently one of his pro-bono positions was Governor at Middlesex University.

“It gave me an opportunity to try to put something back into the University,” he says.

It also put him back in touch with the School of Law and he’s now undertaking a PhD, working with Professor Castellino, Dean of the School of Law. Nik puts his tendency to juggle lots of things down to his student days.

“There were lots of opportunities at Middlesex to do all sorts of things and I found it very fulfilling. That’s what probably led me to being relatively successful as a lawyer too. I’m always looking for something else.”

Nik downplays his success, maintaining that his career has been mostly the result of fortune and curiosity rather than astute planning.

“I'm somebody who says ‘yes’ and then finds out what it's about later. My career has been fulfilling but accidental,” he says.

He does, however, admit his interpersonal skills have helped. Qualities that he believes took root in his student days.

“I'm very happy to talk to anyone and feel comfortable trying to engage with them. I think that comes from my time at Middlesex and engaging with a range of people with very different attitudes, upbringings and backgrounds. Understanding there were many different views in the world – and how to listen and try to understand those views as well as share my own – set me up for life,” he says.

After recovering from a “pretty serious” skiing accident several years ago, Nik decided to take a step back from the law and is enjoying taking his foot ever-so-slightly off the pedal.

“I don't have any burning ambitions anymore. One of the reasons I’ve stepped away from the law is I’ve had a number of very good, high-profile and difficult cases and I'm unlikely to see anything bigger or better,” he says.

Nik does have one pressing ambition though and that is to officially graduate. There was no graduation ceremony in 1977 due to an internal dispute with the Student Union so Nik and other alumni are organising a long overdue ceremony.

“Nearly 40 years later and I'm still waiting!” he laughs. “It looks like we're going to have a proper ceremony this year at last.”