You don’t imagine when you leave university that you'll do something life-changing for other people, but it's possible with team work.

Having qualified as a social worker at Middlesex University in the 80s, Nikki Bradley has focused her career on improving the lives of vulnerable children and families. She's developed award-winning services and advised the government. Her dedication was recognised with an MBE in 2014 and an Honorary Doctorate from Middlesex University.

"I can remember listening to my induction lecture at Middlesex in 1981 feeling anxious. I came from a family where there was no experience of higher education and I felt very unsure about being there. If you'd told me then I'd be giving that lecture myself one day, I would have thought you were crazy. To me, the tutors were so knowledgeable and academic, it would have been beyond my wildest dreams to think I could do that.

"Now, as well as my job managing the Youth Justice and Family Intervention Service in Tower Hamlets, I lecture on the Middlesex University social work course (including giving the induction!). I also teach workshops and sit on the interview panel for potential students.

"I'm very grateful to Middlesex University for what it offered me. I grew hugely as a person during my time as a student and I left with a much greater belief in myself. My degree was fundamental to the work I do now." 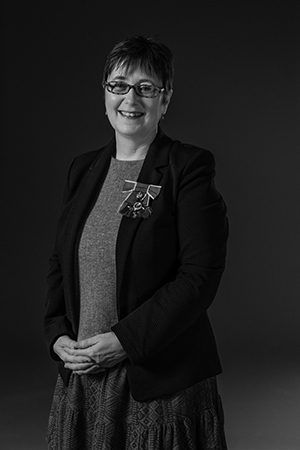 The MBE was a huge honour

"A highlight of my career so far was receiving an MBE in 2014, and an Honorary Doctorate from Middlesex University, for my work with children and families with complex and multiple problems, like anti-social behaviour and truancy. I developed a Family Intervention Project, which involves having one trusted worker who builds a relationship with the family and supports them to work together for the best outcome.

"I was really surprised to receive an MBE for my work. It was a huge honour and an absolute reflection of the whole team I managed and the efforts they put in. You don’t imagine when you leave university that you'll do something life changing for other people, but it's possible with team work."

Middlesex opened up a world of possibility

"Even though I found my degree challenging, it opened up a world of possibility. Half the course was spent out on social work placements, but we always had the University to come back to, to reflect on our experience. In social work, we'd call it a 'secure base'. At Middlesex, there was a real sense of connectivity with other students, a feeling we were all in it together. I built a friendship group there that I still have now.

"We had to work really hard, but there was a sense you could explore things and ask questions. You were never shut down for not knowing the answers and you were allowed to make mistakes.

"Middlesex didn't cosset you; it prepared you. I went into social work with my eyes open and ready to practise. Lots of social workers give up. But this training gave me a level of resilience that meant I could really make my way in the profession."

"The social work degree at Middlesex University is still a great course, that's geared well to the working environment. That's why I teach on it. If a Middlesex graduate applies for a job with me, I know I'll have a rounded social worker with a good basis to start their career.

"To students now, I'd say grab every minute of every opportunity. Read everything you can, and make the most of all the different experiences the university offers. There's not another point in your life like it."