Watching six weeks’ worth of hard toil literally light up in front of her eyes at the London 2012 Olympic Games closing ceremony was a career high for robotics designer Puja Varsani. But it was very nearly a career low when a last-minute malfunction of one of her designs led to a nerve-wracking few minutes. Puja recounts how a bit of quick thinking and team work saw the show go on.

“One of our LED costumes didn’t light up so we were running around trying to fix it with hairpins and rubber bands. Anything! Anything to get it working!” she says laughing.

They did and she can laugh about it now but at the time it was very stressful as she was exhausted after meticulously handcrafting 140 LED costumes for the Brazilian performers. Thankfully she was not alone, working alongside a small team of other newly graduated students from Middlesex.

Despite the excitement of being part of such a high-profile project, Puja – who is now Associate Lecturer for the department of Design Engineering and Mathematics – says watching her students graduate is her proudest achievement.

She was inspired to become a lecturer in design engineering so she could continue learning herself. The immense satisfaction she got from teaching came as something of a pleasant surprise.

"Seeing the growth in a student from their first day in class to the one where they graduate only a few years later is extremely rewarding, knowing you have helped them along the way," she says.

Puja first returned to teach at Middlesex as a Graduate Academic Assistant after being the only female student to graduate in the Product Design and Robotics course in 2012. Puja’s inquisitive nature and tendency to question how things worked as a child was an indicator of her future interest in robotics and engineering. 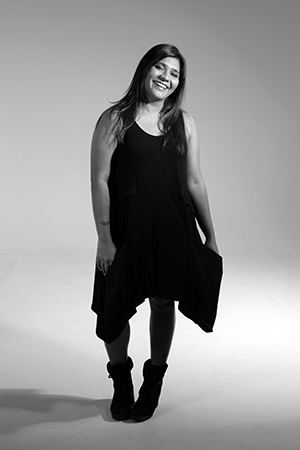 “I always wanted to understand what was underneath the surface, what went into something to make it work,” she says.

However, it took a few wrong turns for her to find the right path. She started an Architectural Design degree at De Montfort University but it was not for her and she left after the first year.

"Even though I loved design technology at school, the course there was nothing like that. I missed being able to walk into a workshop and make something like I did at school. Sitting in a classroom just learning theory didn’t really connect with me," she says.

She heard about Middlesex’s product design course, visited the University and instantly felt a connection.

“I had an interview with [Senior Lecturer] Wyn Griffiths,” she recalls, “and he was just amazing. You could tell he loved his job and teaching. The style of teaching he described was exactly what I was looking for and just looking around the campus, seeing the way the students worked, made me excited about the opportunities Middlesex offered.”

The hands-on nature of the course appealed to Puja and she excelled, graduating with a 2:1 and being selected to represent the UK in the esteemed international skills competition WorldSkills. She competed in the mobile robotics category and became the face of the competition’s poster advertising campaign.

A world of learning

Puja’s eyes sparkle as she describes how going to university transformed her outlook on life.

“The area I’m from in north-west London is not just very Indian, but full of people from the same village as me. I was in a little bubble. Coming to university really opened up the world. Knowing that not everyone thinks the same and not everyone does the same thing,” she says.

There’s one person she singles out for praise – her head of department Professor Mehmet Karamanoglu – for continually pushing her out of her comfort zone and giving her the most important advice of her career: “to do what I want and just be happy”.

"When I did a placement year, people kept saying to me that it may be too limiting to just teach, and that I’d be pushed out of my comfort zone and learn new things if I went into industry. That might have taken me down a different path, but in hindsight I know I made the right decision. I love teaching, I didn't know it at the time, but I know it now."

The prospect of continual learning is also a huge draw of the job and why she’s in no hurry to leave academia.