That’s what I got from this university: that never say die attitude. Just keep trying. Just keep going.

Altruistic business leader Tevin Tobun believes higher education is key to social mobility, which is why he is investing his own money to help under-privileged young people get to university.

“Believe in your dream and go for it. Because, you know what, the worst thing that’ll happen is you don’t win, and then you can try again,” says business leader Tevin Tobun.

You only have to spend a few minutes with Tevin and you feel energised. He’s charming, animated and very inspiring. Just the kind of person you want in your corner, backing your dreams.

Tevin is a big advocate for the power of self-belief but equally passionate about the importance of giving each other a helping hand. Graduating from Middlesex University in 2000, he launched his first business – a design and build venture – within just a few months. He initially struggled to get any interest, so he cold called prospective clients and only managed to make it a success thanks to his very first customer believing in him enough to risk paying a lump sum in advance so he could buy the materials. He’s never looked back: Tevin has proudly never worked for anyone but himself.

“I was lucky the client believed in my passion. She changed my life but she didn't know it. That's the beauty of this world and that's what led me to be such an advocate for giving back. Because that one person could have made a different decision and my life would be totally different,” he says.

Tevin now runs GV Group (Gate Ventures), a multi-sector business with interest in logistics, technology and property development that he founded. He’s also involved in numerous pro-bono activities beyond his day job. He’s chairman of London-based social enterprise Inspirational You, which motivates young people to become successful leaders, and is also bringing his dynamism to Middlesex having recently joined as a governor. Something he was humbled to be asked to do.

“I grew up in south-east London when it was at its worst. Against all odds, I went to university, set up a successful company and have run various businesses. So to come back and be a governor at Middlesex University, that’s amazing to me. That's what this university has given me – the intrinsic self-belief that I can go on and win,” he says. 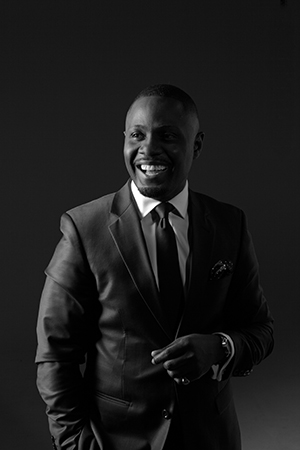 Tevin has put his money where his mouth is too – launching a scholarship scheme in 2015 to fund three under-privileged young people to go to university. He pays for their fees from his own money and provides business-leader mentors to help them in their careers.

“A few years ago, I had a very intense conversation with someone about education. I said that education and hard work are the real tools for social mobility. Whereas his view was that you don't need education to make it. I said: ‘Yeah, but it depends on what family you come from’. We had a very interesting and heated debate and I came out of that discussion thinking that if I believe in education so much, why aren’t I trying to actually make a change? So I decided to have my own scholarship,” he says.

He intends to carry on the scheme indefinitely and hopes one day these graduates will carry on his philosophy of “paying it back”.

Tevin is an optimist and a big dreamer – you can just imagine him putting the world to rights during his student days at Middlesex. He studied at the former Trent Park campus – “a beautiful and unique building” – and recalls the common room was a great place for frank discussions.

“We had very intense conversations there. We were teenagers having serious discussions about all aspects of things. Nothing was off limits. That really helped me learn to be assertive, confident, and able to be myself and add value to conversations,” he says.

He believes his entrepreneurial streak took root at Middlesex University. Despite studying for a Health Studies degree, he discovered an interest in business. His tutors gave him the confidence to take a risk by launching his own business rather than seeking the safety of a secure job.

“That’s what I got from this university: that never say die attitude. Just keep trying. Just keep going,” he says.

It was clearly a risk that paid off and his sense of gratitude to Middlesex is why he’s honoured to have joined the board of governors. He hopes to bring a different perspective to the table but most of all he wants to help the University to shout about its own success and the impact it’s had on people’s lives. He believes its greatest strength is the self-belief it gives students.

“Middlesex gives people the confidence to go for it, whatever they choose to do. This place is a platform to be the better you, whatever your story is,” he says.