Without my time at Middlesex, I doubt that Peppa Pig would exist. The idea developed from a conversation in the pub with Mark Baker and Neville Astley in about 2001.

Former Middlesex technician Phil Davies is the producer of one of the nation's favourite animated children's characters, Peppa Pig. The collaborative environment Phil encountered at Middlesex in the 80s still influences the way he works today.

It was a time of great creative freedom

"At that time, there wasn't an animation degree course like there is now. But graphics undergraduates could choose it as an option. It was a very practical, studio-based module, initially students were set briefs to make short animated films in groups.

"As is the case now, the tutors were all practitioners in the industry. It was a 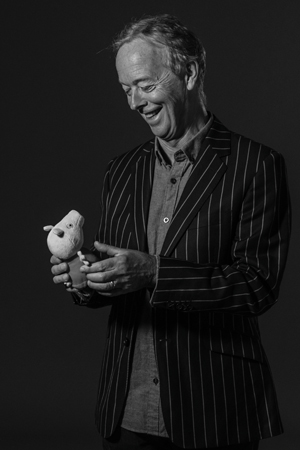 very collaborative environment, with everyone pitching in ideas – students and tutors. It was a time of great creative freedom. There would be some crazy ideas and we'd all work out how to make them into something the students would be proud to show.

"It a very supportive, informal environment. It reminds me a lot of how we work now at our production company. In our studio everyone works together. Our animators sit side by side with the producers, directors, designers and layout artists. A lot of magic comes out of that process."

"If all goes well, I won't be surprised if we're asked to make even more.

"We're proud that we can wave the flag for British animation and have led the way for more animation to be produced in the UK. I find the accolades a bit embarrassing really. [Peppa Pig has won six animation BAFTAs and had a further 11 nominations.] It's a wonderful feeling to get that recognition of your work, particularly from your peers."

"Take the chance to collaborate with staff and your peers. There's nothing like getting feedback from fellow students as to whether you're going down the right road with your work. You get instant feedback while you're at university, which is something you may miss when you leave. So use that support structure around you. There won't be any other time in your life quite like it – it's precious.

"It was tremendous to receive an honorary degree from Middlesex. I loved seeing all the animation students, knowing that some of them are going to go on to do something really special in the industry."

Advice from an expert: how to make it in animation

You must be persistent because of the nature of animation – it's quite slow and painstaking.

When I first pitched Peppa Pig, someone senior in the industry said "You'll never get this series made. People want CGI these days not 2D animation". But I stuck with it. I trusted my instinct that it would be a success.

Be flexible in your approach

We had to adapt our concept early on, to make it expandable to toy and book companies. If we hadn't, we'd have fallen at the first hurdle and could have prevented the series being made. So even though you should trust your instincts about your idea, you have to listen to what people tell you and be flexible.

"The way we worked at Middlesex back then reminds me a lot of how we work now at our production company.

In our studio, everyone works together. Our animators sit side by side with the producers, directors, designers and layout artists.

A lot of magic comes out of that process."