It was the Olympic Games. I suddenly got a wave of fear because it was what I'd been working towards for four years.

Olympic champion and fine art alumnus Joe Joyce discovered he could excel at both boxing and painting while studying at Middlesex University.

Amateur boxer Joe Joyce achieved his ultimate ambition at the age of 30: to win an Olympic medal. But that’s not the end of his journey. With his motto being “to continually improve myself”, and his recent announcement that he will turn professional, it’s clearly only the beginning.

Despite looking like he was destined for a career in super heavyweight boxing, the towering 6ft 6in Londoner’s entry into the sport came about by chance. He’d always been sporty and was competing seriously in athletics while studying a BA Fine Art degree at Middlesex University. However, an Achilles heel injury and niggling self-doubt made him question whether he had what it took to get to the top. So in his final year he took to the gym to train in boxing instead.

Looking back, he says, he didn't ever feel the same passion for athletics as he does for boxing.

“I didn't feel the sense of achievement from athletics that I do in boxing. When I was supposed to be getting a picture taken for my bronze in the shotput, I was upstairs looking at the boxing,” he says.

He graduated with a 2:1 in Fine Art in 2009 but decided to see where boxing would take him. It’s been a long and hard journey but he has gone on to win British, Commonwealth, European, and World Championship medals and, of course, a silver Olympic medal at the Rio Olympics 2016. 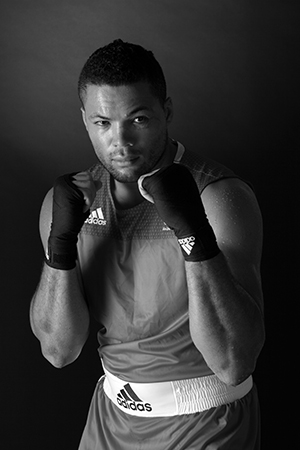 Despite narrowly missing out on gold, after a controversial split decision to Tony Yoka of France, he says the whole experience in Rio was “incredible”. Not to mention surreal as he found himself alongside world-famous athletes such as Andy Murray, Mo Farrah and Ussain Bolt. Given his prowess in the ring, you’d think that nothing fazes him but you’d be wrong.

“I did have a moment in Rio when I was in my room after they had done the draw and I was boxing later that day. I suddenly got a wave of fear when I thought about it because it was the Olympic Games. It was such a big thing and it's what I'd been working towards for four years. I don't normally get like that. I'm usually quite cool and calm,” he says.

He and his teammates had very little sense of the levels of excitement around the games back in the UK so arriving back to a press scrum in Heathrow was a bit of a shock.

“There were hundreds of cameras and people greeting us from the airplane. People chasing us to get autographs. It kind of put things into perspective,” he says.

But he’s adjusting well to his newly-found fame as an Olympic medallist.  “It's all right,” he says grinning. “I’m happy to take a few selfies here and there.”

Joe is certainly asked to pose for a few on the day we meet to chat on the Hendon campus, happily stopping for snaps with staff and students in the Quad with his silver medal proudly held in hand.

Joe has fond memories of his time at Middlesex, relishing the freedom it gave him and the chance to unite his two seemingly opposite passions.

“I was like every other young person, struggling with what I wanted to do with my life. I was good at art and I was good at sport but Middlesex University helped me to find myself and my style,” he says.

He recalls being particularly inspired by two third-year art students – Glory Charles and Jeremy Lee, the former of which helped him to stretch his first canvas, and the tutors.

“I had a number of tutors who gave me good ideas and directions to take things further,” he says.

Joe lived in halls of residence in his first year, where he made some great friends. Although, he says, he was happy not to be too far from his home in south-west London and his mum’s cooking.

“It was good because I could go back home on the weekend and top up or bring some food back!”

Although Joe is focused on boxing now that doesn’t mean he won’t return to painting in the future.

“Once an artist, always an artist. I love art whether I get a chance to create it or not. My sole focus is boxing at the moment, because I don’t want to be a jack-of-all-trades and a master of none. So I'm being a master of one for now,” he says.

“But my long term thought is to do a Master’s after I've retired from boxing and to start it up again.”