We want to help students succeed and sometimes that means taking a more pastoral care role than maybe some other universities would take.

Middlesex University kept drawing Dr Debbie Jack back into its fold after she graduated with a BEd (Hons) in the early nineties. Now Head of Education, she explains why the institution has been pivotal to her life and career.

Dr Debbie Jack’s life has been intertwined with Middlesex University for nearly 30 years – she studied a BEd in Primary Education: Science and Computer Education there, returned to do a PhD, and joined the Education Department as a Senior Lecturer in 1995. She even met her future husband at the University – he was her PhD course tutor. Now the Head of Education, it’s fair to say that Debbie has experienced the University from all angles.

She credits the University’s culture of encouraging and celebrating for keeping her for so long.

“As a place of work, opportunity is keen here. I think everybody is given opportunities to develop and progress in their careers, right across the University and at all levels,” she says.

She’s not an anomaly in terms of her tenure though. The University has an impressive track record in staff retention.

“There are quite a few people who've been here for 15 years-plus in my department. Several that have retired since I've been Head of Education were here for 30-35 years. People like working at Middlesex as it treats them well and fairly. It’s a very flexible employer too. We look after our staff,” she says.

Debbie is a big champion of looking after staff – in fact the aspect of her role she enjoys the most is “supporting staff development”. An ethos that she believes is embedded in the culture of Middlesex and another reason why she has stayed.

“I feel so comfortable at Middlesex University as it has the same values as I do around fairness, equality and kindness,” she says.

Debbie is a very warm person and you can tell she would have been a great primary school teacher – she taught in a school after graduating but returned to academia and Middlesex when offered the chance to do a PhD.

“They rang me about a research project on science and technology education because I'd got a first class degree and they had funding for PhD students. That was the start of my being drawn back,” she says. “I was also invited to do a lecture for newly qualified teachers so I did that as well. It was like I kept being pulled back in. Then a couple of years into my PhD I saw a job at Middlesex advertised and applied.”

She progressed quickly through the ranks and finally completed her PhD after eight “hard” years – she did it part-time and dedicated all of her free time to it. Finishing it was the pinnacle of her career.

“It was the hardest thing I ever did but one of the most worthwhile things,” she says. 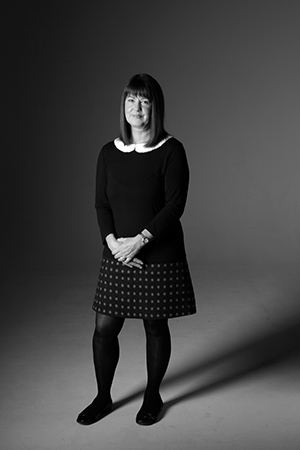 Debbie occasionally finds it bizarre that she is now heading up the very department where she studied, but loves the many challenges of her busy role. Although she has less day-to-day interactions with students than she used to, she still gets a buzz from seeing them grow.

“One of my favourite events of the year has to be graduation, even now. There's nothing quite like seeing the first years starting out in Welcome Week and then three years later graduating,” she says.

Debbie is adamant that her and her staff have a responsibility towards students that goes beyond being just educators.

“Our aspiration is to be the best teaching department that we can by making sure our staff are equipped to do their best from a teaching point of view, but also by supporting our students in whatever life has thrown at them. We want to help them succeed and sometimes that means taking a more pastoral care role than maybe some other universities would take,” she says.

Under her leadership, Middlesex’s Education department continues to build on its reputation for teaching excellence. One of the ways Debbie believes it does this is through the strong culture of staff research, which underpins the teaching with current, evidence-based thinking.

“This is a huge benefit to students,” she says. “It makes staff’s learning current and it enriches the curriculum. If students come to a university to be taught by so-called experts then they want reassurance that those experts are actually still up-to-date in their own learning and thinking,” she says.

When Debbie was studying for her BEd, she was based at Trent Park, a beautiful country house and grounds in north London which she loved. Despite the four-year course being something of a “hard slog”, she found time for fun, making “life-long friends”, and discovering a life-long passion – sailing.

She has since seen many physical changes at Middlesex – including the move of her department from her beloved Trent Park to the Hendon campus in 2012.

“We didn't want to move, but actually once we came to Hendon we saw there was such a big improvement in the facilities. They're second to none here. It's been nice to see those changes happening and the investment that the University has put into the infrastructure,” she says.

Another significant and positive change from her undergraduate days is the collaboration between students and the University.

“Students are more vocal about when things aren't right now and I think that's a good thing. Student voice is very important to us and we take it seriously, certainly in the Education Department we do. The Students’ Union, as the voice of the students, is very good and very collaborative. The strength of that relationship has definitely improved,” she says.

Despite some transformations, however, she believes the soul of the University remains the same.

“It still has the same fundamental good things about it: fairness, treating people right and being a good place to study and work,” she says.

And if Debbie has anything to do with it, that won’t alter any time soon.