The culture of Middlesex is one of its strengths: the blend of learning and having fun.

Business leader and Middlesex alumna Beatrice Lafon has had a highly distinguished career but she hasn’t forgotten her formative years at the north London university.

“I lived in a freezing house in Enfield with four others: there was no heating so we’d put the oven on and open the door,” says Dr Beatrice Lafon, recalling her “dodgy” student digs when she studied at Middlesex in the early eighties. “We’d have to put more clothes on to get into bed than to go outside. And ice would form around the edge of the bath!”

It’s a far cry from the jet-setting executive lifestyle she went on to lead after graduating with two European Business Administration degrees. Beatrice wouldn’t have changed a thing though. She’s a big believer it was character building.

“Pretty much half of my best friends today, I met at university,” she says. “You form long-term relationships as you share these things and grow up together. University is when you start to really experience life. And because we were in a foreign country it was all the more exciting. There was a real sense of adventure.”

Beatrice is a vivacious presence when we meet on campus to discuss her student days. She’s excited to be back and remembers Middlesex as a “lively place”.

“The culture of Middlesex is one of its strengths: the blend of learning and having fun,” she says. “Talking, chatting, and engaging with people was a big part of my student life. It was a great place to learn about the world, and therefore a great place to prepare you for the world.”

She particularly loved the multiculturalism, which was important to her as she always intended to forge an international career. The course itself, which included two years at a business school in France and two in Middlesex with work placements in each, was “fantastic” and struck the right balance between “creative and rational thinking”.

“It was a great training ground for going into business,” she says.

Beatrice was known for her fun-loving nature and recalls being warned by one tutor that she was “having too much fun”. It was clearly working though as she graduated with a first and went on to a string of senior executive posts where she successfully turned around profits, boosted sales and accelerated growth. Most recently Beatrice was CEO of Claire’s Accessories. Middlesex recognised her achievements with an honorary doctorate in 2013.

“I've been fortunate as I’ve thoroughly enjoyed all my jobs. I've w 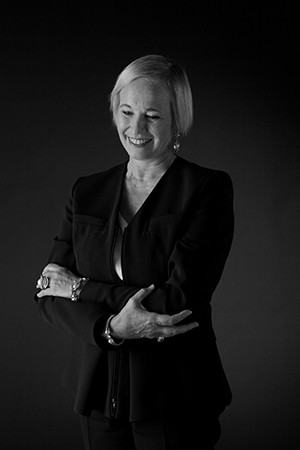 orked for very different companies along the way… but that’s what I learnt at university – to adapt,” she says.

Most of her career has been in retail though. Beatrice relishes the fast-paced nature of the sector – “I like results and I like them quick” – and believes it’s in her blood. Her grandmother had a shop in the suburbs of Paris and she helped out at weekends.

“Even back then I liked engaging with customers, trying to understand what they might like and how we could provide a solution for them,” she says.

Her knack for understanding customer behaviour has been a hallmark of Beatrice’s career. She gained a reputation as a “turnaround specialist” early on when Marks & Spencer, her first employer, recognised her ability to “identify problems, understand the solutions and put them in place”. She transformed its loss-making babywear department when she was appointed as a merchandiser.

“Within 18 months we had the greatest profit in all of clothing. We became the number one player in the marketplace and were for many years,” she says.

It was a defining moment for Beatrice – “I realised I was Miss fix-it” – who believes her people and communication skills have been fundamental to her results.

“The biggest part [of my success] is the way I work with people and a lot of that is down to how I learned to engage with different people at university,” she says. “The so-called ‘people dimension’ is what makes businesses successful. You need people to feel the opportunity, feel the vision, and believe in the business’ future.”

Beatrice loved executive life but resigned from Chicago-based Claire’s Accessories last year when her mother became poorly and she realised her son needed her more.

“Juggling long hours and travel with being a single mum was always a challenge, but that's the choice I made. My son’s never known anything else, but now he's nine, I'm learning that it's much more important for me to be available to him.”

She’s back living in the UK and excited about this new phase in her life where she intends to consult, take on a portfolio of non-executive roles, and take up a ‘small’ CEO role because she still likes to build teams and businesses but needs more balance with her home life.

And Beatrice has finally realised something important.

“I've lived and worked in many different countries in my life, but I've only discovered this year that London is home. It's taken me all these years to work out where home is,” she says.