Middlesex was a beautiful creative place – a real hub for art.

Award-winning artist Kelvin Okafor, 33, graduated from Middlesex in 2009 with a BA (Hons) in Fine Art. He’s since become known for his incredibly life-like pencil portraits of public figures including Nelson Mandela, Amy Winehouse and Daniel Craig, as well as his own friends and family.

“To me, my greatest success is simply being able to spend my time drawing. I draw for 12 hours a day, for two or three weeks at a time. Each portrait takes up to 200 hours. I have amazing experiences during that time, particularly meeting new people and getting to know them. To complete a piece always feels like a huge success.

"In another sense, my biggest career success is being commissioned by 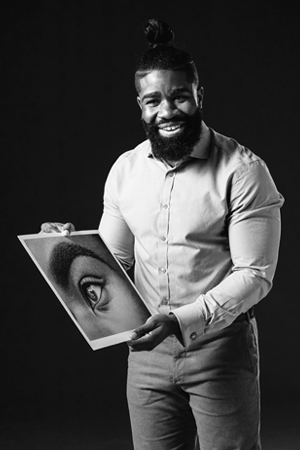 Parliament to draw the late MP Bernie Grant. The portrait hangs in the Portcullis House and I’m the first black artist to have their work permanently exhibited as part of the Parliamentary Art Collection.

Hopefully it will give other young artists confidence to know their work could also make it into establishments like that."

The feeling was priceless

"Drawing has always been my passion. I knew I loved pencil, it was the colour of my heart, but I had no idea the direction I was going to take it. When I left university, I didn’t know how I was going to make a living from my art, but I knew the feeling I was getting from what I was doing was priceless.

"By 2012, I’d built up a portfolio of portraits of celebrities as well as friends and family. The stepping stone for me was winning the Visitors’ Choice Award at the National Open Art Competition out of 350 artists. I was blown away that the public chose me, as the works on display were incredible.

"After that I won a runner-up prize in the 2013 Best of Show at Cork Street Open Exhibition. That award opened me up to a new clientele in Mayfair galleries in London and I started selling more of my work. The press officer at Middlesex, Shazia, created a publicity campaign about my work and worked with the BBC on it. It gained global media coverage and everything took off from there, so I’m extremely grateful to Shazia.

"One night my sisters called me to tell me that my drawing of the American rapper Nas, a phenomenal musician I admire greatly, had shared my portrait on Instagram. I am truly honoured to have him share my drawing. That kind act opened up even more doors for me."

The facilities at Middlesex are amazing

"I chose to study at Middlesex after a visit to the old campus at Cathill. It was a beautiful creative place, with fashion, fine art and sculpture, a real hub for art. When I went there I just felt at home.

"University was a whole new world for me. All the people I met, and their influence and inspiration, really humbled me.

"I felt blessed and honoured to be invited back to Middlesex to donate a portrait and take part in a photoshoot. The current students are very fortunate – the facilities they have at the Hendon campus are amazing. They should use them as much as possible.

"As an artist in this day and age you have to have a business hat on as well. But the thing that’s been key for me is honesty. Always be honest in your work. I believe in the saying ‘the truth will set you free’, especially when you’re trying to establish yourself as an artist. If you’re truthful in what you’re doing, you’ll eventually receive what you deserve.”