A career at the Bar was something Ossie Osman never dared dream of until he enrolled on a law degree at Middlesex University and his life changed irrevocably.

The highly respected barrister has been involved in numerous murder trials, large-scale human and drug trafficking cases, and serious fraud and terrorism cases – including the plot to bomb trans-Atlantic airliners in 2006 – during his 20-year career at the Bar. “You see the worst of human behaviour, the consequences that it brings and the devastation that it causes,” he says.

It’s a far cry from the days when he was cutting hair for a living in north London. But then Ossie, as he likes to be called, was never one to shy away from a challenge. Determined to do something different with his life, and fuelled by a fascination with society and human behaviour, he embarked on a law degree at Middlesex Polytechnic, as it was then, in his mid-20s. He felt instantly inspired and encouraged.

“At my initial admissions interview with a lecturer called Penny Childs I felt as though she saw something in me that I didn't see in myself,” says Ossie. “I got a real sense of warmth from her… That first encounter really sealed it for me.”

In fact, Ossie entirely credits Middlesex and Penny with his career choices. It was the lecturer who suggested he try for the Bar after he impressed her with his advocacy skills at a mock trial.

“It wasn't on my mind at all. All I wanted was to have a law degree and see where that took me,” he says. “So Middlesex allowed me the opportunity to completely change the direction of my life. Completely. A direction I never thought I was going to be going down when I was a hairdresser. I had a sense of a dream and it allowed me to fulfil it.”

And he hasn’t looked back since, relishing the drama of the courtroom while taking the great responsibility that comes with being a barrister incredibly seriously. 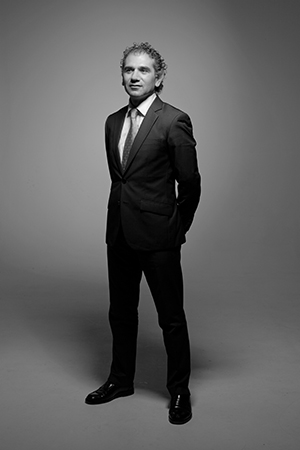 Despite this pressurised environment and the often gruelling nature of cases, Ossie continues to push himself.

“Even though I've done the best part of 400 trials, I learn something from every case I come out of. That's what keeps me strong. I always want to push myself. I always want to do the next most challenging case, the most difficult case. I don't shy away from cases,” he says.

Drive and determination have been integral to Ossie’s success, particularly in the face of some negative preconceptions. As the state-educated son of Cypriot immigrants who was once a hairdresser with a law degree from a polytechnic, he isn’t a typical barrister, he says.

“Sometimes in the early days, when I’d appear in court I’d be in front of judges who were old and public-school educated, and they’d think: ‘Well, who are you and where have you crawled out of?’” he says.

He expected to feel intimidated when he found himself among “the cream of academic students” at Bar school at the Inns of Court, but this was not the case. In fact, his unconventional background made his achievements all the more impressive to his peers.

Ossie adamantly believes that if he had studied at a university with a more traditional approach to teaching law then his career would have taken a different path – probably to a law firm in the City.

“The course at Middlesex was very practical with a lot of problem solving. So when I went to Bar school, which was about the practical application of law, I didn't find it difficult,” he says.

Today Ossie works mostly on complex commercial cases having established anti-corruption and anti-bribery as his specialisms. He’s concentrating on building his international profile as an independent counsel to corporations wanting to do business in the UK. While it’s clear he loves being “at the heart of our democratic system”, his advice for law students considering the Bar is tempered.

“It’s demanding, tiring and draining, but highly fulfilling,” he says. “If you go to the Bar, you’re not going for a job, you're going because it's going to be almost everything in your life. One benefit of that in the past was you got paid pretty well for that. Nowadays, you don't and there are many people at the Bar who are really struggling,” he says.

But Ossie wouldn’t change a thing about his career choices.

“When I look at where I'm at now, what I've done and what I'm involved in – all of the things that I've done in my career at the Bar – well, it would be foolish to ignore that if it wasn't for this place, I wouldn't be where I am now,” he says.