Shooting for the stars

I love the diversity here and being surrounded by different cultures because you get to learn so much.

Caitlyn Ebsworthy was “delighted” when she was accepted on the BA Film course at Middlesex University. A life in London beckoned for the teenager from rural north Devon. But it’s not where she pictured herself five years earlier, when she was shooting for a career in professional football. Caitlyn was undergoing trials for Portsmouth Argyle but in a film-worthy narrative twist she seriously damaged her neck in a match. An accident which put paid to her plans.

“It was really hard to come to terms with because I’d been playing since I was about five years old. I’d spent so much time and hard work to get to the level I was at,” she says.

While recuperating, Caitlyn spent a lot of time watching movies and television, which ignited a new passion in her – film-making. Now 19 and in her second year of a BA in Film, Caitlyn wouldn’t have it any other way.

“When I look back, I think if I hadn't had the accident I’d never have decided to go into film. I'm really happy to have gone in the other direction because I really love what I do,” she says.

Having come to terms with her life taking a different path, Caitlyn was determined to do all it took to break into the industry. With very few work opportunities in Devon, she secured work experience at See-Saw Films in London.

“It was brilliant to be working there on Carnaby Street. So exciting. I remember the PA, Sam, saying to me: ‘If you love film, you'll find a way to get there’, which is really true,” she says.

The placement pushed her on to “get involved with anything media based” while studying for her A Levels at Petroc College in Barnstaple and plotting her route to London. She launched the student newspaper, worked at a cinema and made a documentary based on one of her other loves, musicals. It was this film that she sent along to support her application to Middlesex. “It got me here!” she says proudly. 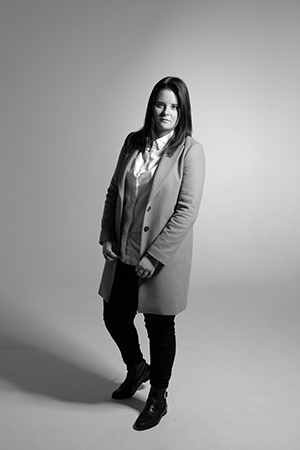 Although she briefly considered going to university in Cardiff – filming location for her beloved Doctor Who – she says there was never really anywhere but Middlesex University for her.

“I loved the fact it was in the heart of London with opportunities to go and work with film and TV companies. The equipment was fantastic and the staff were industry professionals and all very keen to nurture new talent into the film industry,” she says. “It was the one that was most enthusiastic about practising film, as opposed to just teaching film.”

The hugely ambitious student is “in her element” living in London and feels constantly inspired.

“I think we're spoilt actually being in a London university because we’ve got the City and its fantastic public transport. I love the diversity here and being surrounded by different cultures because you get to learn so much. London is such a global hub and just a wonderful city,” she says.

She definitely makes the most of being close to the West End, admitting she watches “far too many shows for my poor bank account” but credits the theatre with providing inspiration.

“I find it a very good template for filmmaking, and for screenwriting as well, and television. I always revert back to the theatre,” she says.

Despite her love of theatre and film, Caitlyn is leaning towards pursuing a career in television. She has her sights set on becoming a producer, director or scriptwriter on a top quality drama but sensibly is still figuring out her strengths. Caitlyn appreciates that her course allows her to explore a range of disciplines and strikes a “great balance” between the practical and the academic. The “fantastic” equipment and professional standard facilities are another big benefit of studying at Middlesex, she says, giving a real sense of what it’s like working on set.

Despite finding the second year tougher than the first, Caitlyn enjoys the increasing challenges.

“It's a big jump up in terms of production quality and expectation, which is exactly what you want from a university,” she says. “I love the fact the tutors treat us like professionals. They’ll push us because they know what we're capable of and I really appreciate that. They want us to produce high-level stuff. We need that pressure because it’s a bit of a mafia industry,” she says.

Caitlyn is well aware of how difficult it is to break into the media industry, particularly with no family connections, but chatting to the passionate student you can’t help but feel that if anyone will crack it she will with her hard-working, can-do attitude.