The power of positivity

The thinking power that was unlocked in me just as a result of being at Middlesex was incredible.

Mumbai-born Danish Bagadia had a challenging childhood but was always motivated to make his way in business. Now a senior marketer at Google in the UK, the Middlesex marketing graduate shares the secrets to his success.

“I remember lying flat on my tummy underneath my bed. It was pitch black and there was a group of people outside with machetes and swords, shouting and trying to get in,” says Danish Bagadia, recalling being caught up in Mumbai’s race riots as a boy in 1992. Born and raised in the Indian city, Danish’s family lived in “the slums” until he was ten years old and a change in his father’s circumstances meant they could move.

Now responsible for a substantial budget as Google’s Head of Performance Media Marketing for Europe, Middle East and Africa, he has certainly come a long way. Danish moved to London in 2004 to study MA Marketing Management at Middlesex University, thanks to the support of his hardworking parents.

“My father worked so hard to get us to a place where he could pay for my fees to study in London. It’s amazing what he achieved. And now here I am: I work for Google. That's an incredible journey and makes me proud of what I’ve achieved too,” he says.

The marketing manager believes his drive and positivity stem from his childhood experience of poverty.

“I try to look at everything now with the angle of positivity. You might be going through the worst thing in your life but there are a lot of people who are going through even worse things so you need to put it in perspective,” he says.

A place of possibilities

For Danish, London had always been painted as a city of opportunity by his family and he’s now proud to call it home.

“It was my grandad's dream for one of the grandsons to go to the UK and study. So my dad basically pushed me into it and I'm glad he did,” he says. “I feel like this is the city that has given me a lot of things. I'm proud to be a Londoner.”

Danish recalls his very first day at Middlesex vividly as it was a very “emotional time” leaving behind his family. But he was surprised how quickly he adapted. 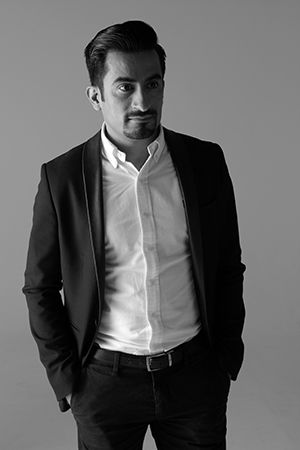 “Almost as soon as I arrived, I felt at home in Middlesex because there were people from all over the world, not just India. It was different to Mumbai, but not totally different,” he says. “I remember queuing up opposite the Shepherd's library to fill in a form and feeling really excited because it was the start of a new journey for me. It was one of the best times in my life.”

Cultural differences in the classroom

While he adjusted to campus life easily, Danish found the teaching techniques took some getting used to. He had no idea what a dissertation was. No concept of case studies and working in groups was unheard of.

“It was totally different to my degree at the University of Mumbai. It was more interactive at Middlesex. More personalised. More focus on practical skills. In the beginning that was a bit of a learning curve,” he says.

This way of learning and being a student at Middlesex opened his eyes to the world.

“I was quite limited in my world experience. I was sort of in a bubble. So coming here and being exposed to so many things was amazing. The thinking power that was unlocked in me just as a result of being here was incredible. I don't think you can get that just anywhere. It was very particular to Middlesex,” he says.

Positivity and passion are qualities Danish consistently comes back to when talking about his success. In fact, he credits the supportive nature of his course tutors for helping to shape his set of life principles – what he calls POP: passion, optimism and perseverance.

“I didn't hear any negative thoughts from my tutors. It was always very much like: ‘Yes, you can do it. Go for it’,” he says.

Making it in the industry

Danish’s perseverance and foresight paid off when he decided to pursue a career in the then small-scale digital marketing industry after enjoying a module on the subject.

“I thought maybe online marketing was a thing and I could pursue a career in it. At the time, 12 years ago, the internet was very low key and there were very few jobs out there,” he says.

He went on to various jobs in digital marketing including roles at Havas and Mediacom before securing what he describes as his “dream job – the holy grail of digital marketing” in 2014. He’d always been fascinated with Google and was unashamedly proud of himself when he got a job there.

“I had a bit of a "yes" moment the first day I walked in to my job. That's when I felt like I'd really made it in this industry. And it’s made my parents proud too. My dad goes around telling everyone that his son works at Google. So that's a great feeling as Mum and Dad worked hard for us kids,” he says.