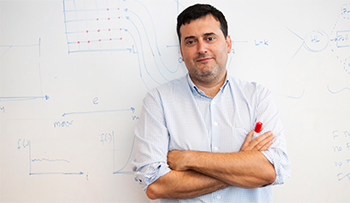 In the first of a new series, we look at the ways Middlesex University is responding to global trends with pioneering new courses and research by exploring the developing world of behavioural economics.

"The traditional model of economics assumes rationality," says Professor Branas-Garza. "But in the past 20 years the evidence has shown us that humans do not behave as we assumed. We are risk averse and we don't always act in the most logical way."

To illustrate his point, Professor Branas-Garza uses the example of having children. "If we considered raising a family from a purely cost-benefit point of view we'd never do it," he explains.

One of the key factors behind such seemingly irrational decisions such as having children is that humans are not very good at computing time. For this point, Professor Branas-Garza turns to biscuits.

The concept of 'time discount' is critical in relation to important financial decisions such as pension planning and is one of the reasons why many people fail to prepare adequately for later life. Research has shown poor planners are also likely to be more unhealthy – smoking and drinking without considering the health implications further down the line.

"We need to adopt a less rigid approach to way we approach economics and human decision making in general and the behavioural model provides that flexibility" - Professor Pablo Branas-Garza, Middlesex University

Another important consideration in behavioural economics is 'intrinsic motivation' – the hidden reasons why people act in a certain way. Traditionally in HR, it was assumed that you could motivate workers by simply giving them more money, but Professor Branas-Garza explains that this can backfire in two ways.

Firstly, this ignores the variety of motivators for employees. For example, someone who truly believes in a project and achieving a successful outcome, such as a charity worker, might not be inspired simply by being given more cash. Secondly, financial rewards can lead to envy – a concept that is closely linked to Professor Branas-Garza's research on social networks. The tighter the network, the greater the chance that those within it will become envious of one another.

So what then is the behavioural economics-inspired solution for HR practitioners?

"Employers can reward employees in less easily comparable ways, such as giving them extra holiday days, or by providing more favourable working structures," he says.

"We need to adopt a less rigid approach to way we approach economics and human decision making in general and the behavioural model provides that flexibility."