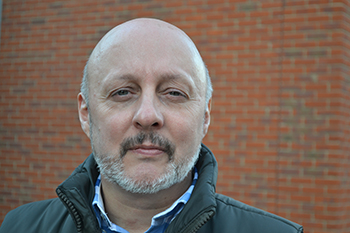 On 5 September 2014, Middlesex University held a ground-breaking conference to discuss and debate the issue of violent street gangs inspired by the work of Lecturer in Criminology and Sociology Dr Simon Harding.

'A New Direction on the Question of London Street Gangs?' brought together both experts working on the front line to tackle gangs in London and those devising and developing policies behind the scenes.

Dr Harding used the conference as a forum to talk about his five years of research into gangs in the Borough of Lambeth, explaining how Pierre Bourdieu's gaming theory can be applied to gang hierarchy to explain the existence of a dangerous and dynamic 'street casino'.

The event also provided a valuable opportunity to discuss what research and scholarship in this area has to offer policy and decision makers.

For anyone who missed the conference, here are just some of the highlights:

"The reality of gangs is brutal. There's a lot of death and a lot of trauma, and gangs are reflective of many entrenched problems in society.

When trying to tackle the gangs issue, it's very important not to become trapped in a silo of your own specialism. Effective remedies need a long timeline and multi-disciplinary expertise. That's one of the reasons this forum is so valuable.

More than half of all London boroughs are affected by gang violence. Fear breeds violence, and the fact is that gang violence is widely underreported.

Mental trauma has been highlighted by mental health experts as a major issue within gang culture. There are thought to be high levels of early stage mental and emotional health problems among members of gangs."

"The street casino metaphor I use to describe gang life is not just about gambling one's life away. It's about playing a game that is addictive, risky and dangerous. My thesis on gangs is heavily influenced by gaming theory, as proposed and developed by the French sociologist Pierre Bourdieu.

Everyone in a gang is trying to build 'street capital'. When someone has more street capital they have dominance and respect, and when they have less they are more vulnerable and more likely to be victimised. I wanted to investigate how gang members try to build street capital by creating and managing their own personal 'brands'.

I studied the example of gangs in Lambeth (SW9) and identified a number of reasons why violence there had increased, including limited opportunities for young people and a convulsive and dynamic community.

Each individual's street capital can rise or fall at a moment's notice. For example, if you're disrespected by a member of another gang, you may then feel the need to up the stakes and hit back – for example, by stabbing the offender – in order to regain that capital.

There are certain 'shortcuts' to getting a lot of street capital quickly. Typical examples include getting a weapon dog, using a gun, or moving into another gang's postcode and taking photos of yourself there. All this creates a 'landscape of risk' and surviving this landscape of risk involves constantly monitoring your street capital.

I've also identified some key recent changes in the nature of gangs, including that many new gang members are now immigrants from overseas and that people are staying in gangs for longer and are becoming more embedded.

It's crucial we recognise and understand these trends if we are to tackle gang issues as effectively as possible."

Listen to Simon talking about The Street Casino at the launch event here.

Jenny Oklikah, Head of Violence and Early Offending at the Home Office

"Young men from deprived backgrounds are so much more likely to become involved in violence than young people from other demographic groups. Age, gender and deprivation are all powerful drivers of violence.

In the development of gangs and the involvement of gang members, there are certain key points at which it can be particularly important to intervene. This is one of the reasons it's so important for those tackling gangs to share knowledge and speak to each other, so we are all able to identify those points.

In 2011, the government produced the 'Ending Gang and Youth Violence' report. The study identified the following '5 Ps' as crucial: providing support; partnership working; prevention; pathways out; and punishment and enforcement.

In the first year of the programme following the report, we worked with 33 priority urban areas in the UK to tackle gang issues. Policy has shaped what we do locally, but it's also important to recognise that local issues and findings have also shaped policy.

Some of our key challenges going forward include working with health and mental health partners and recognising the importance of the women and girls involved in gangs and to increase support for them.

We believe gang violence is down, but is still under-reported. We are also aware that the nature of gang activity is changing. For example, more gangs are moving into committing fraud and burglary, and are exploiting vulnerable young people in order to complete drug deals."

Marie Snelling, Director of Integrated Offender Management, Programme and Neighbourhoods at the Mayor's Office for Policing and Crime

The London Crime Reduction Board (chaired by the Mayor) has invested around £3 million in responding to gang issues.

Areas of investment include crime impact statement work, the girls and gangs strategic framework, and work around the mental health issues associated with gangs.

Key stats include that 70 per cent of gang members are aged between 17 and 23; 93 per cent have a previous sanction; and 23 per cent of females and four per cent of males identified themselves as victims of sexual violence or exploitation within gangs.

We can see that the nature of gang activity in London is changing rapidly. One key change is that we're starting to see gang activity in outer London boroughs as well as in inner London. Another is that an increasing number of cross-border gang operations, across borough lines.

The overarching strategy going forwards is to reduce the harm caused by gangs through prevention, intervention and enforcement.

Since June 2014, we've secured £600,000 for specialist youth support in London's four major trauma centres. We've also secured £460,000 to dedicate to mental health and safeguarding training for those working with gangs on the front line.

"The mission statement of Trident Gang Crime Command is as follows:

'To tackle gang criminality in London by effective enforcement, suppression and proactive policing, working with partners to prevent offending and build safer communities.'

We need to also tackle gangs within a prison context and work to improve the situation within prisons by taking the gang-operating model of enforcement and applying it to a prison context, so that situation can be better managed.

In this period of cost-cutting and austerity, the Metropolitan Police Service faces particular fiscal challenges in finding the resources to tackle gangs. However, there is a positive side to this, as it will hopefully encourage the Service to collaborate with other agencies to pool resources and expertise.

As other speakers have said, this approach is crucial if gang culture is to be tackled effectively.

Patsy Wollaston and Andrew Hillas from the Probation Service

"The government sees reducing reoffending rates as a high priority - particularly among adults who have been given sentences of less than 12 months. This group includes many young adults involved in gangs.

There are certain key changes happening within the probation service that will inevitably affect how gangs and gang members are dealt with. Specifically, the 35 regional probation trusts in England and Wakes have been split into two new organisations: The National Probation Service (NPS), which assesses and deals with the highest risk individuals, and the Community Rehabilitation Company (CRC), which is to focus on the rehabilitation and management of low and medium-risk individuals.

We know that around 80 per cent of gang members are from black and minority ethnicity communities, so it's very important we understand this association.

In the future, we aim to build more links with health and mental health services, so we can better identify and tackle the under-reported mental health issues among gang members. We also recognise the need to better engage with the girls and women associated with gangs.