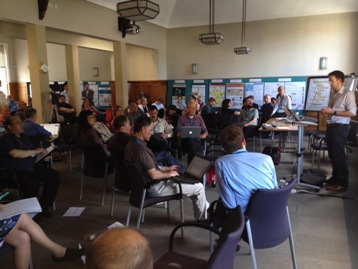 Law enforcement agencies in Europe could soon have a new tool to help them analyse and investigate criminal activity, thanks to a pioneering €13 million project led by Middlesex University.

The European Commission-funded project sees Middlesex lead a consortium of 18 international organisations in the development of a visual analytics-based criminal intelligence analysis system intended to process vast quantities of data and to identify suspicious patterns of behaviour.

Named VALCRI (Visual Analytics for sense-making in Criminal Intelligence Analysis), the system will be designed to provide early warnings of impending criminal activity and support the increasingly complex work of the police and intelligence agencies in the age of the internet and global terrorism.

Using powerful analytics software and data laid out in an interactive and graphical manner, VALCRI will be used by police analysts to investigate crimes and crime-related behaviour, complementing and enhancing current police capabilities.

Criminal intelligence analysis is incredibly mentally demanding and can be very time intensive given the uncertainty and ambiguity involved, explained Professor of Human-Computer Interaction at Middlesex University and VALCRI project lead, William Wong.

"Sorting the significant from the insignificant and connecting the dots is difficult with large volumes of data, and it's getting more complex as sources such as social media increase," said Professor Wong.

"It's no longer humanly possible to sift through all the data if the police are expected to respond in an efficient timeframe."

VALCRI could provide a solution to this, with the 18 international organisations involved in the project including law enforcement agencies, universities, businesses and research organisations.

Those involved include the Belgian Federal Police and West Midlands Police Force, while 72 scientists, engineers and law enforcement professionals from eight different countries will also be working on the project.

"The consortium aims to design the technology from cognitive, legal, ethical and privacy perspectives so that the rights of the individual to security and liberty will be respected while ensuring the good of society," Professor Wong added.

"VALCRI will also enable law enforcement agencies to make their processes more transparent, so that the process by which their conclusions are reached are made easier to inspect."

The project aims to use data to paint a comprehensive picture for crime fighters and help prevent the miscarriages of justice which could potentially occur when dealing with big data.

Mistakes can arise for a number of reasons in these instances. Data overload can pose significant problems, while a lack of awareness of the availability of relevant data can also be problematic.