Middlesex grads invite you to ‘push the boat out!’ at new nautical exhibition

Middlesex University graduates have teamed up with guest artists to put on a nautically-themed event like no other. 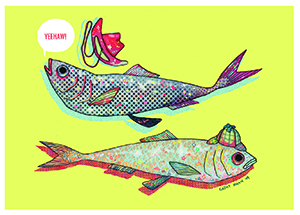 The collective of Illustration graduates, called Drawn Chorus, will be putting on AHOY!, an illustrative imagining of mysteries and tales of the sea. The immersive, collaborative exhibition will feature nautically-themed lino cuts, pencil drawings, collage, digital works and sculpture.

Visitors will also be able to get a sneak peek at a unique anthology book created by 30 talented illustrators, including Middlesex University staff.

The show launches on 28th August, to commemorate the 200th anniversary of the disappearance of the USS Wasp in the Bermuda Triangle. Displayed at the Espacio Gallery near London's Brick Lane, the exhibition runs until 2nd September. 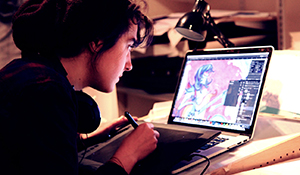 behind the project: "AHOY! will be much more than just pictures on a wall; for the opening we'll be creating an experience tailored to the theme with space dressing, interactive elements, music and themed food.

"One of the reasons we started the Drawn Chorus was to keep the spirit of the university studio going. Working alone in your room can be lonely compared to being constantly surrounded by a bunch of creative types who also happen to be great friends.

"Everyone also has a very distinct style, and there's a fantastic diversity of approaches within the group."

Between them, the illustrators in the Drawn Chorus have been shortlisted for the prestigious Association of Illustrators awards, the annual Folio Society competition, the Macmillan Children's Book Prize and the Threadneedle Prize. They have also worked for a number of well-recognised brands and publishers. The group's previous exhibitions, including 'The Greatest Show on Earth' and 'Curiouser and Curiouser', were very successful and were covered by media including Timeout, Digital Arts and Design Week.