A Middlesex University professor has been invited to take a leading role in a review looking at whistleblowing in the NHS. 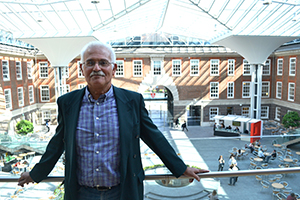 David Lewis, Professor of Employment Law at Middlesex University School of Law and Convener of the International Whistleblowing Research Network, is conducting research for the Freedom to Speak Up review announced by the Secretary of State for Health earlier this summer.

The independent review will look at how to create an open and honest reporting culture in the NHS. It will be led by Sir Robert Francis QC, who chaired the landmark independent inquiry into care provided by Mid Staffordshire NHS Foundation Trust between January 2005 and March 2009.

Professor Lewis will be working with colleagues at Middlesex to undertake the quantitative research that will be at the heart of the review. The team is undertaking a confidential survey about whistleblowing, to be sent to all NHS trusts and their staff together with relevant regulators, trade unions and professional bodies.

Professor Lewis explained why Middlesex's involvement in the review is so important: "Middlesex has been invited to take part in this high-profile, independent review, which reflects the high esteem in which the university's research abilities are held.

"The NHS is the fourth largest employer in the world, so it's very exciting to have the opportunity to analyse what is and isn't working in its workforce."

He continued: "We've been able to draw on the skills and expertise of other colleagues within the School - for example social science experts like Alessio D'Angelo and leading software specialist Dr Lisa Clarke.

"This project sets a great precedent, as it shows we have the team and combination of skills to take on other large-scale research projects in the future."

The state and future of the NHS is a huge political issue at the moment, as the country moves towards the May 2015 general election. The Freedom to Speak Up report, with recommendations from the review, is expected to be published in November 2014.