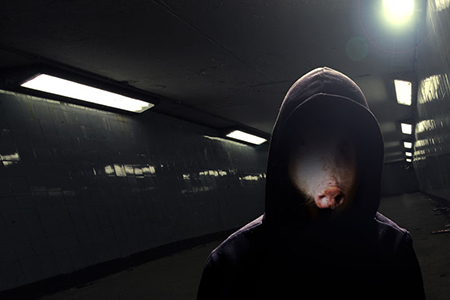 Revolution Farm is inspired by the George Orwell classic Animal Farm; but with a twist of its own. The new piece, produced by Community Links, gives the satire a fresh, contemporary edge. It integrates modern urban language - and is being vividly staged at Newham City Farm.

James Martin Charlton, Acting Head of the Media Department at Middlesex University, is directing the piece. He explained the thinking behind it:

"Revolutionary Farm is a great opportunity to see Orwell's 1940s allegory through new eyes. The adaptation by James Kenworth is a radical re-imagining, fractured through the lens of the London riots and Arab spring.

"The cast mixes professional actors with young people from the Beckton area, many of whom know nothing of Orwell, Animal Farm or revolutionary politics. It's been great to see it through their eyes; and the animals on the farm have been a great inspiration in terms of movement and character building.

"Getting BA Film students involved in the promotional and archive filming of the production has been a great opportunity for them to operate in a professional arena and for us to utilise their advanced skills and creativity for the benefit of the project."

Revolution Farm has been tipped as one of the top 10 theatre openings in August by Time Out magazine.

Several Middlesex students will be playing crucial roles behind the scenes. The trailer for the production has been directed and shot by Elvina Neva and edited by Mantas Beginskas - both recent BA Film graduates. A third BA Film graduate, Abel Diaz, is working as a Production Assistant on the project.

The production will run for eight performances between Tuesday 19 and Sunday 24 August. To book tickets, visit www.animalfarm.ticketsource.co.uk