Middlesex underlined its status as one of the UK's most diverse universities as it played host to the Diversity Conference on 23 September.

More than 150 business leaders and practitioners came together for a day of inspiring speeches, seminars and panel discussions held in the Rickett Quadrangle, all of which highlighted the numerous benefits of a diverse workplace, including the advantage it gives you in the global market. 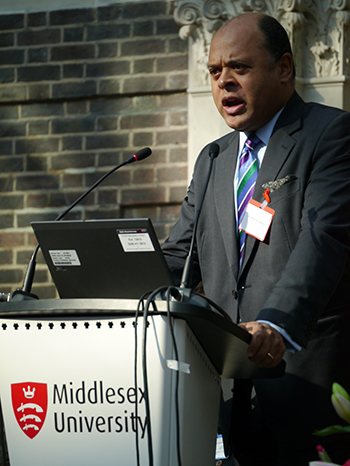 The day began with a series of keynote speeches delivered by both Middlesex academics and esteemed guests.

Professor of Journalism and long-time BBC broadcaster Kurt Barling talked about Middlesex's role as "a crucible of change to improve practice" and referenced Jesse Jackson's praise for the University's diverse approach.

"Here, we must nurture the leaders of tomorrow," he added.

He was followed by his former colleague, BBC Academy Director Anne Morrison, who talked about the initiatives being implemented at the public service broadcaster to improve black and minority ethnic (BME) representation both on screen and in the newsroom.

Oliver Robbins, Director-General Civil Service Reform, then spoke on the benefits of diversity – "The same instincts that promote diversity promote creativity" – and the difference between providing "positive support" to BME employees versus "positive discrimination" against white workers.

"At Middlesex, we must nurture the leaders of tomorrow" - Professor of Journalism Kurt Barling

In the afternoon, a number of seminars took place around the College Building, including a Workplace Perspectives session featuring Middlesex Research Fellow Roger Kline discussing the impact his 'The Snowy White Peaks of the NHS' report has had on the service.

One of the key points from Roger's seminar was the knock-on effect that discrimination in the workplace can have. "If those who care aren't cared for, patients suffer," he explained.

The delegates then reconvened in the Quad for a 'What's Next?' panel discussion featuring 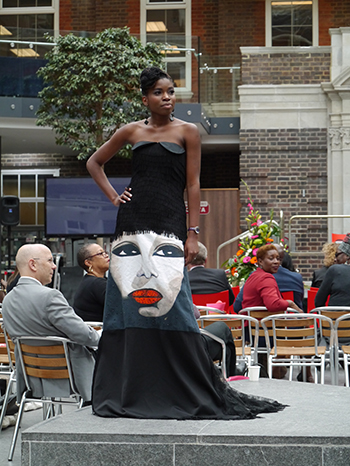 musician and diversity champion Patti Boulaye, who later performed two songs, as the focus of the event switched from serious discussion to celebration.

This provided a number of Middlesex students with the opportunity to take centre stage. First, John Jeffcock, CEO of co-hosts Winmark, presented prizes to students enrolled on the 'Equality, Diversity and Inclusion' and 'Consulting to Organisations' modules led by event organiser Dr Doirean Wilson.

The Equality students had produced diversity toolkits that can be used by the industry, while the Consulting students created a marketing strategy for the Diversity Conference with assistance from Perry Timms, CEO of HR firm PTHR.

Business School and Social Science students and alumni, including Graduate Teaching Assistants Ana Marinica and Elena Ciochina, then took part in a fashion show of creations designed by Dr Wilson, several of which featured images from her diversity-inspired art exhibition on the sidelines of the conference – a fittingly varied end to a day of diversity.