Middlesex University has appointed renowned choreographer and founding artistic director of the Place and the London Contemporary Dance Theatre, Robert Cohan CBE as a visiting professor. 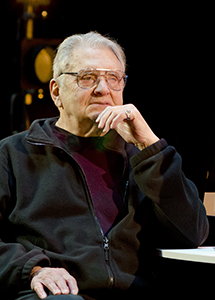 Middlesex University has appointed renowned choreographer and founding artistic director of the Place and the London Contemporary Dance Theatre, Robert Cohan CBE as a visiting professor.

This appointment will see Cohan enhance his existing relationship with the University and the School of Media and Performing Arts.

Cohan continues to be an inspiration to dance at Middlesex – he has given lectures and master classes to final year students during rehearsals for their performances at the Arts Depot venue in north London and most recently in Beijing, assisting and inspiring them to perform several of his classic dances including Stabat Mater and Forest. He continues to work closely with Professor Chris Bannerman and Associate Professor Anne Donnelly documenting his pedagogic approach to dance teaching.

Robert Cohan trained at the Martha Graham School in New York and began his professional career in dance when he joined the Martha Graham Dance Company in 1946. He quickly moved to soloist and then performed throughout the world as a partner to Graham herself.

Cohan was recognised for his outstanding contribution to dance in the United Kingdom in 1988 with the award of an honorary CBE and in 2012 he was awarded the De Valois Award for Outstanding Achievement in Dance.

Middlesex University Director of Dance Programmes Anne Donnelly said: "Robert Cohan's influence on the development of modern dance in Britain has been considerable. He has played a huge part in the development of our students too, and I am delighted he will continue this relationship with Middlesex as a visiting professor."