Four teams of Middlesex University students will battle it out against the UK’s most talented young engineers and learners in the finals of the WorldSkills UK National Competitions at ‘The Skills Show’. 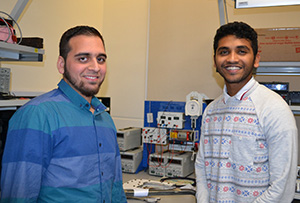 The show, which runs from the 13 to 15 November 2014 at the NEC Birmingham, is the UK's largest skills and careers event.  The show hosts the WorldSkills UK National Competition Finals, which take place in more than 60 skills ranging from forensic science to engineering.

Middlesex University Design Engineering student Zoubair Vahed said: "We've been training hard for the competition, so I'm confident that we'll do well. The practice has also helped us in our studies and gives us an enhanced understanding of the technologies we use and their capabilities."

During the three days of The Skills Show, the Middlesex students will be competing alongside 550 young people in front of 75,000 visitors with the aim of being crowned UK champions.

"It's my first time in the competition, so I'm a bit nervous, but also looking forward to it," said Middlesex University Design Engineering student Jerin Raji Thomas. "Despite their being a number of us competing in Mobile Robotics from Middlesex, all the teams have been supportive and we've all been helping each other out."

They will be accompanied at the show by fellow Middlesex students who are running a number of 'Have a go' area where visitors can get a hands-on-experience of new skills.  In the various skills areas, Middlesex students hope to inspire young people to find out more about and learn new skills in public health and mobile robotics.

A Middlesex team will also be on hand to tell visitors about the type of opportunities available to young people through University Technical Colleges (UTCs), including the Tottenham UTC, the first of its kind to be backed by a Premier League football club; Tottenham Hotspur, alongside Middlesex University and others.

Middlesex University staff will also be giving spotlight talks and features to enthuse visitors, including former judge from the Robot Wars TV programme and Professor of Robotics Martin Smith who will be showcasing robots from the programme, and the world's first 'thrill engineer' and Professor of Creative Industries Brendan Walker who will be talking about his work.