Encounters with radical preachers Abu Hamza and Abu Qatada are the topic of a new book launched at Middlesex University, the occasion being marked with a debate on human rights. 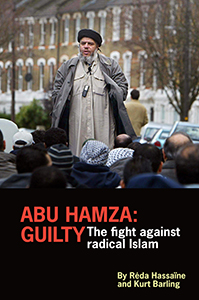 During the debate Phil Shiner, Middlesex University Professor of International Law and head of Public Interest Lawyers, said: "Having human rights makes this world a safer place. The UK created a method of apparently lawfully interning people for years, 10,000 plus at any one time, so that's a rolling programme of each person in internment for 12 months, that's a lot of radicalised Iraqis. Years later we the UK created the leader of ISIS, al-Baghdadi – in my book we created ISIS." 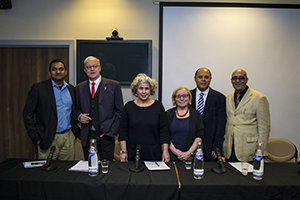 receive in the United States would amount to a breach of his human rights – not the same privilege he accorded to those on whom he issued numerous fatwas justifying the murder of women and children.

"Again in the West we're faced with the conundrum of a man willing to sacrifice lives in pursuit of jihad because it was God's will, defending his actions on personal human rights grounds."

Joining professors Shiner and Barling on the panel, which was chaired by Dean of the School of Law Professor Joshua Castellino, were Dr Maureen Spencer and Dr Helena Wray. 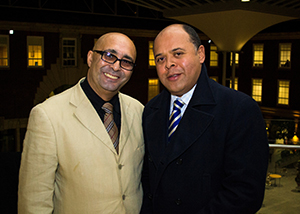 The book 'Abu Hamza: guilty: The fight against radical Islam' discusses the experiences of two journalists – Professor Barling and Réda Hassaïne who went undercover in Finsbury Park Mosque. They both became eye-witnesses to the birth of British jihadism and the attempts to radicalise young men and build a global jihadi movement to inflict harm on the West.

Professor Barling wrote the book with Hassaïne, a journalist and former Algerian, French and British Security Service informant who was employed to gather information on Abu Hamza at the north London mosque.

The book 'Abu Hamza: guilty: The fight against radical Islam', published by Redshank Books is available to buy now.