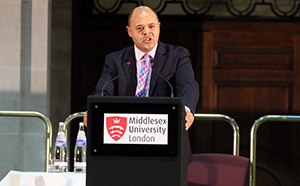 The book, 'Guilty - The fight against radical Islam', discusses the experiences of two journalists – Professor Kurt Barling and Réda Hassaïne who went undercover in the Mosque and 'identifies the signs that were missed and the consequences that the world faces as a result'.

Professor Kurt Barling wrote the book with Réda Hassaïne, a journalist and former Algerian, French and British Security Service informant who was employed to gather information on Abu Hamza at Finsbury Park Mosque in north London.

By sheer coincidence, Professor Barling was also working undercover at Finsbury Park Mosque in the 1990s and early 2000s and both became eye-witnesses to the birth of British jihadism and the attempts to radicalise young men and build a global jihadi movement to inflict harm on the West.

The launch event will include a debate on whether human rights are important in the dignity and worth of every individual and that the effective functioning of rights contribute to a heightened sense of well-being for most if not all, resulting in safe societies.

Tickets are free and can be booked through Eventbrite.

For further information on the event please contact c.rose@mdx.ac.uk or l.huggett@mdx.ac.uk