Acclaimed performance artist Janice Perry returns to Middlesex to perform her latest work Naked At The Met, giving students the opportunity to learn from her working practices. 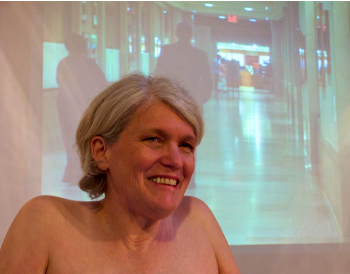 After performing the work-in-progress in front of students and lecturers she used their feedback to refine it into a finished piece, and she returned to our Ravensfield Theatre to perform it in its entirety.

"Naked At The Met is a tale of a fall from grace via gender, sexuality, an aging body, and a 30-foot cliff," explains Perry, who BBC Radio named "one of the world's most respected performance artists".

"I free-range from pop to Pope in an attempt to pervert the course of social injustice, while tackling the physical aftermath of a 30-foot free-fall."

Using video and digital images along with her own live performance, the autobiographical show explores issues ranging from mild traumatic brain injury to social conservatism, power and loss, sexism and anti-feminism.

"I know that doesn't sound like a laugh riot, but it actually is," says Perry. "I want to be living proof that creativity is the best revenge."

Performing in front of Middlesex Theatre Arts students and using their comments to inform her work has proved valuable for Perry, but it is also a fantastic opportunity for students learning about solo performance to work closely with such a highly-regarded practitioner of the discipline.

"The Ravensfield Theatre is a little jewel. It's a pleasure to perform there," Perry says. "Both times I've performed at Middlesex, the students' questions have been thoughtful and perceptive. The first time, I was showing Naked as a work in progress, and comment and questions after that show helped me greatly in developing the work.

"I love to perform for students, to demonstrate that performance is an amazing platform for work that has the ability to influence thought and foster social change," Perry adds. "If you feel strongly that something is wrong, make work that shines a light on it.

Following the fantastic reception Naked received, plans are underway for Perry to return in 2015 to work with Theatre Arts students again, this time investigating the creative process alongside them and helping them get their own work out there.

"We are already discussing getting Janice back again next spring to both perform for and work practically with students on the Theatre Arts programmes," says Sam Beale, Senior Lecturer in Theatre Arts and Programme Leader for the degree's Solo Performance pathway.

"Her performance offered Theatre Arts students a rare opportunity to see her perform in the UK. During a Q&A session about her working practice, she was generous with advice and encouragement for our second year Solo Performance students currently preparing their own performance projects."