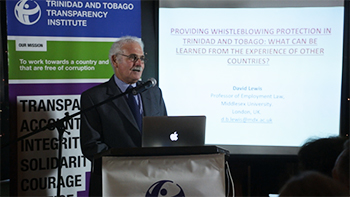 Middlesex University Professor of Employment Law David Lewis has returned from Trinidad and Tobago after visiting the country to talk about whistleblowing as an anti-corruption tool.

Professor Lewis, who is currently conducting research for the Francis review of whistleblowing in the NHS, was asked to lend his expertise by Trinidad's Transparency Institute and the British High Commission, which is keen to assist countries experiencing problems with corruption – Trinidad and Tobago having fallen to 85th place in Transparency International's Corruption Perceptions Index.

His first engagement was a lecture at the Hugh Wooding Law School attended by staff, students and members of the judiciary. He then took part in a meeting at the British High Commission in Port of Spain where the practical possibilities for making an impact on the Trinidadian Government were discussed. This was followed by a keynote address at the annual fundraising event for the country's Transparency Institute attended by business people, practising lawyers, NGO advisers, senior civil servants and representatives from the ILO, EU and several high commissions.

On day three of his visit, Professor Lewis's final engagement was to lead a session at the Ministry of Finance for the Caricom Secretariat where he discussed the role of whistleblowing in safeguarding procurement arrangements with permanent secretaries, ministry representatives, NGO's, bankers and senior executives working in the private sector.

"It seems clear to me that one of the main reasons corruption is so prevalent in Trinidad and Tobago is that there is no political will to take effective action to combat it," commented Professor Lewis.

"Procurement and general integrity statutes have been approved by parliament but there is no effective whistleblowing legislation. Since Trinidad is no longer regarded as an under-developed nation, in my opinion there is no good reason for it to lag behind Jamaica in respect of whistleblowing measures."