A new kind of fairground attraction that allows people to ‘ride their own brainwaves’ has been developed by artist and engineer Professor Brendan Walker. It was showcased at a top central London festival this weekend. 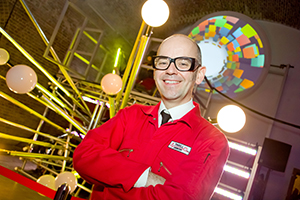 Neurosis is a thrill ride which reads the brain waves of the rider as they are taken through a virtual reality world and jolted around on a specially made platform. The motion platform at the heart of the ride was developed in partnership with Middlesex University, where Brendan Walker is Professor of Creative Industries.

Innovation charity Nesta commissioned Professor Walker to create Neurosis. He has been working in partnership with a number of institutions and artists, including Arts Council England, to develop the thrill ride.

It was unveiled for the first time on Saturday and Sunday (14 and 15 March) at Nesta's FutureFest event in central London. The public were treated to rides on board Neurosis during the two day festival which gave a taste of what the world might feel like in the decades to come.

To ride Neurosis individuals sit in a red chair, don virtual reality glasses and wear a mind-reading head-set to be taken through a virtual reality world created with Middlesex University Senior Lecturer in Digital Technologies Dr Magnus Moar. The world changes depending on the brainwave signals and the chair sends them in all directions during this sensory extravaganza.

The headset reads the electrical activity from 14 parts of the brain and was developed at the University of Nottingham. The rider must control his or her thoughts in order to control the ride as the chair's movement and world before their eyes change to their mood and movement.

A number of people have been involved with Professor Walker on the project, including The Mighty Jungulator, who has created a digital soundtrack to further bring the ride to life and Festo who developed pneumatics for the motion platform.

Brendan will now make the motion platform chair at the heart of Neurosis open source and hopes it will inspire school children to get involved with engineering and science projects. 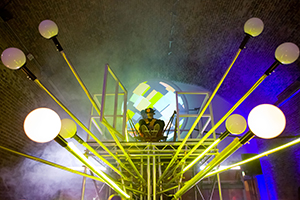 Professor Brendan Walker said: "Neurosis is going to allow designers to create a whole new genre of fairground rides, where the only limitation is your imagination. Your body is the limit on traditional rides, on this ride every twist and turn is directed by your own brain waves.

"The ride responds to you, and gives each individual a personal ride. If you're not excited the chair will move faster to make you more exhilarated, if you reach a state of meditation the ride will reflect that. The technology responds to emotions like excitement, boredom, frustration, and meditation."