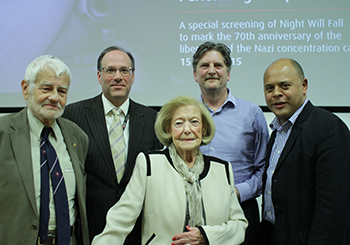 The emotional viewing was followed by a panel discussion chaired by Middlesex Professor of International Politics Brad Blitz (second from left) and joined by panellist Professor of Journalism Kurt Barling (right), who ten years ago visited Bergen-Belsen with Gena and her daughter for the BBC.

"It was a miracle I survived" - Gena Turgel

When asked by one of the more than 100 audience members just how she had survived the horrors of Bergen-Belsen, Gena described it as "a miracle".

But far from being bitter, she and local Hendon resident Bernd were keen to express their gratitude that they, unlike so many victims of the Nazis, were able to make it to Britain and build a new life for themselves – in Gena's case with one of her liberators, Norman, who she married within six months of being rescued.

And all the panellists were in agreement that 'Night Will Fall' and other documentaries of its kind are essential for educating others about the dangers of intolerance and preserving living memory of the Nazi's crimes after Gena and her fellow survivors have gone.