Creative economies were on the agenda when Middlesex University brought together top creative thinkers to share thoughts on the future of arts, cities and media in an increasingly digital world. 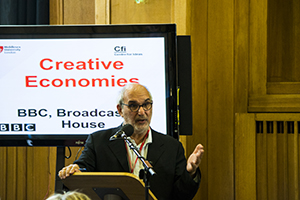 Alan Yentob, Creative Director of the BBC told the audience: "The opportunity of digital media has been phenomenal. It's very important we understand the role of creativity.

"Creativity is also about collaboration, it's about teamwork. You need practical tools, you need insight, you need imagination, you need people with different perspectives on the world."

Will Saunders, Creative Director, Digital, BBC TV talked about trends in video. He said: "BBC has always been at the heart of technological innovation, content innovation has been a big part of everything we do.

"Strategy changes a lot in my environment, you don't necessarily need to drive people to your website, they will find it in their timelines. Radio 1's mantra now is listen, watch, share."

Middlesex University Professor of Fine Art Sonia Boyce said: "Despite this idea that there's this huge creative energy taking place here in the country, a kind of optimism you might say of how the creative industries are not only creating an enormous amount of money. But there is this other side about what the artists are earning. 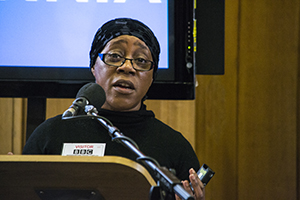 "The problem here is this tension between writers and artists about having to supply money for the use of images. Artists rely on writers to disseminate not only ideas but reinforce the sense of the intellectual and cultural value of the works that artists are making, but writers depend on artists too."

Kirsten Dunn, Senior Culture Strategy Officer at The Mayor's Office, pointed out that creative economies bring jobs. She said: "While the Fourth Plinth attracts a huge amount of comment on social media, it also provides jobs. It's the perfect illustration of the close links between art and manufacturing and art and the creative industries.

"We don't want a city where there are no artists and creative, creative people give cities their authenticity. The creative economy in London requires a balance - you have to play to the city's strengths. To maintain London as a world city we need to keep its cultural edge."

Graeme Evans, Professor of Urban Cultures at Middlesex University said: "The balance between place, economy and culture is the holy grail that all cities are trying to triangulate and achieve some balance between the three."