Youngsters from schools across Barnet and Enfield donned their gowns this week as they 'graduated' in a series of special ceremonies marking the hard work and dedication of north London children.

450 youngsters from year two to year eight came together at Middlesex University for the Barnet and Enfield Children's University graduation which took place over the past two weeks.

It is the fifth time the University has hosted the event for Enfield, and the first for Barnet, which forms part of a national initiative and is organised locally by the Edmonton Schools Partnership.  It is aimed at children aged between seven and 14 to raise their aspirations by recognising their achievements in out-of-school activities and learning.

The number of hours of extra-curricular activities that the children have taken part in over the last year were recorded and stamped on a passport, which they brought along to the ceremony, before they were dressed in their purple gowns and mortarboard and took to the stage.

Certificates are awarded in categories and children can build up a substantial number of stamps.  A bronze certificate is awarded for 30 hours, silver for 65 hours and gold for 100 hours. For 300 hours there is a gold diploma and 400 hours a gold degree.  There is also a selection of 'postgraduate' degrees for those build up over 430 hours.  Silver and gold certificates in each category are also awarded with a medal.

Across the day, the pupils took to the stage where they were presented with their certificate by football freestyler and former Lea Valley High School student Billy Wingrove.  Three-time world record holder Billy is one half of the F2 Freestylers, and is one of the most watched football freestylers on YouTube, notching up over 50 million views.

After the ceremony, the children were treated to a special performance by Billy showing off his ball skills before they were given a chance to try it out themselves. 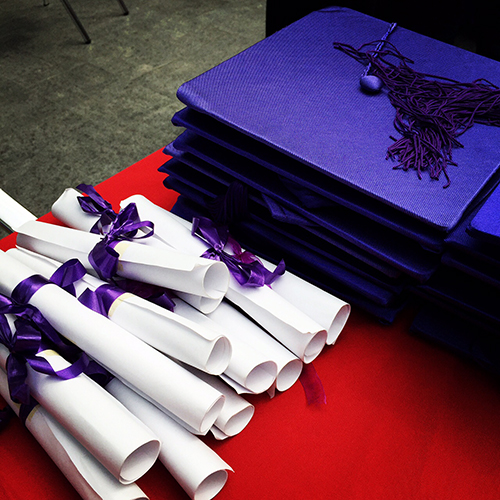 Education Liaison and Outreach Manager Elita Eliades-Ahmed said: "This is the fifth time we have hosted the Enfield Children's University graduation and it's always thrilling to watch each youngster celebrate their special moment with families and friends.

"The enthusiastic children have made a massive commitment to outside learning over the last year, with exciting events ranging from art and sports clubs at schools to forensics clubs and even activities at ZSL London Zoo and crown courts across the capital.  We hope they continue to explore the fun and learning that can be had outside of school."

"The graduations are a wonderful way to recognise and celebrate their achievements outside the classroom."

Cllr Ayfer Orhan, Enfield Council's Cabinet Member for Education, Children's Services, Libraries & Protection, said, "The children have discovered new skills and learned so much through this scheme. I am delighted that they have done this in after school clubs and got so much out of it.

"There has been a huge choice of activities: art clubs, drama and GLEE clubs, cooking and healthy eating, sports, music, learning to play musical instruments, visits to museums and London Zoo.

"This range of activity has given the children experiences and a chance to pursue an interest that will stay with them. It expands their knowledge and encourages a thirst for more. Well done to them and thanks to the teachers who give up the time to run the activities."

Enfield schools that took part in the event included: