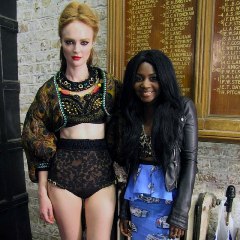 A Middlesex University fashion graduate, has been crowned winner of a high profile television series competition which saw her tailor made outfit worn by music star Rihanna at a live concert in front of 65,000 people in London.

Zainab Vandu-Chikolo (23) was handpicked by Rihanna in auditions for the competition and was among 12 designers in the 10 week show screened on the Sky Living channel.  In each programme the designers were briefed by a celebrity on their requirements and style and then had three days to design and create a bespoke and innovative outfit for the star to wear to a high profile event, which included live performances, photo shoots and red-carpet events.

At the end of each episode a winner was selected, with the least successful designer being asked to leave the competition.  The designers were narrowed down each week until only three remained.  The final three were tasked with designing an outfit for Rihanna for the Wireless concert, her biggest live London gig, with the winner only finding out they had scooped the top prize when she walked on to stage in their outfit.

The show, aimed at seeking out fresh new design talent, had all the designers working in a special design studio and living in a luxury property in Primrose Hill, London.  Nicola Roberts, Henry Holland and Rihanna’s stylist Lysa Cooper acted as judges and mentors to the designers in the high pressured competition.

Zainab, who graduated in 2010, proved successful throughout the competition after winning the first challenge in episode one to design an outfit for Kanye West.  For the final she closely studied Rihanna’s style, performances and stage set, to create a black and gold peacock two-piece outfit incorporating jewellery, silk and fringing which was selected by the star.

Middlesex University graduate Zainab said: “I brought one of the outfits that I created for my final year project to the auditions and was honoured to even be selected by Rihanna for the show, let alone go on to win the competition.  For the final designers left at the end of the series, it felt like such a long wait for her to appear on stage at the Wireless concert.  I was completely stunned when she came out in my outfit and went crazy!  I don’t normally cry, but burst into tears when she walked out in my piece.”

Zainab, who is currently working for a British luxury fashion house, is now looking for partners for a collaborative collection and hopes to go on to be a designer in her own right in the future.

“I learnt lots of new techniques in my fashion course at Middlesex, which helped me to be creative while sticking to the brief for each show.  The competition was an incredible experience and working with a star as big as Rihanna was fun as she was laid back and pretty normal,” added Zainab.