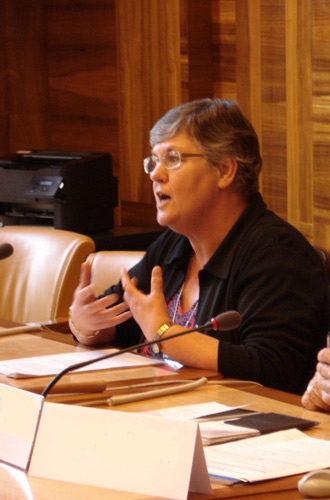 The conference was attended by LGBTI activists, academics and representatives from religious organisations from all over the world. Dr Howard was invited by the Special Rapporteur on Religion or Belief Heiner Bielefeldt and Ani Sonneveld, President of Muslims for Progressive Values.

Dr Howard’s talk was based on a report she wrote with her Middlesex colleague Senior Research Fellow Alice Donald for the international Lesbian, Gay, Bi-sexual, Trans- and Intersex Association’s European arm in January last year.

“Human rights law abhors a hierarchy of rights. When two rights appear to be in conflict with each other, a balancing of all interests at stake must take place. This balancing test is often referred to as a ‘proportionality’ test.”

Before travelling to Geneva, Dr Howard was the keynote speaker at the AGM of the European Network on Religion and Belief talking on the topic of ‘Security, Freedom and Solidarity’, responding to the current crisis in the European Union, and presented a seminar on ‘Reasonable accommodation of religion and other discrimination grounds in EU law’ at the Academy of European Law in Trier, Germany, which was attended by law academics from all over Europe.