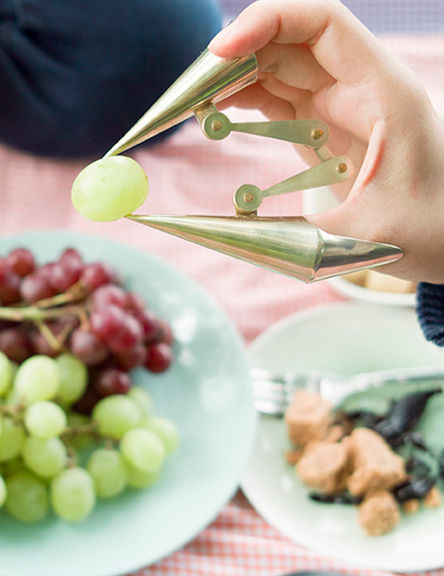 The Institute of Making, a cross-disciplinary research club, has crowned BA Product Design graduate Wataru Kobayashi the winner of their Cutlery Design Challenge.

Inspired by the art, craft and science of how we eat, the competition asked participants to design and prototype a new implement, tool or device for eating.

Wataru’s BUGBUG is a set of stainless steel picnic cutlery designed for the consumption of insects; including chopsticks for eating insects and dish plates for serving.

"The concept behind BUGBUG is to provide an alternative solution to the impending food crisis,” said Wataru, who is originally from Japan.

“I wanted to change the perception of people eating bugs – I thought about the existence of tools for eating snails and crabs and realised if these hadn’t existed then people wouldn’t have experienced eating them.”

The judging panel, made up of Dr Zoe Laughlin from the Institute of Making, a representative of the Cutlers’ Company, a top chef and a cutlery manufacturing expert, were “transfixed” and “in wonder” when viewing BUGBUG for the first time.

“The thought that had gone into it, the depth of craftsmanship and conceptualisation, the humour - this is the most extraordinary thing we had seen and we wanted to celebrate that," they said in a joint statement.

BUGBUG was part of Wataru’s final year project; a product which he says was made possible with the support he received from his tutors and other product design staff.

“My tutors gave me the confidence to enter the competition and Rachel, a wonderful metal works technician, helped me choose the right materials for the product.” Wataru Kobayahi, BA Product Design graduate

Looking to the future, Wataru’s success has inspired him to aim high with dreams to work at a top design studio in London or elsewhere in Europe.