Cyrille Tchatchet II came to the UK to represent Cameroon as a weightlifter in the Commonwealth Games. Once here, he applied for asylum as a refugee and began a long fight for his right to remain 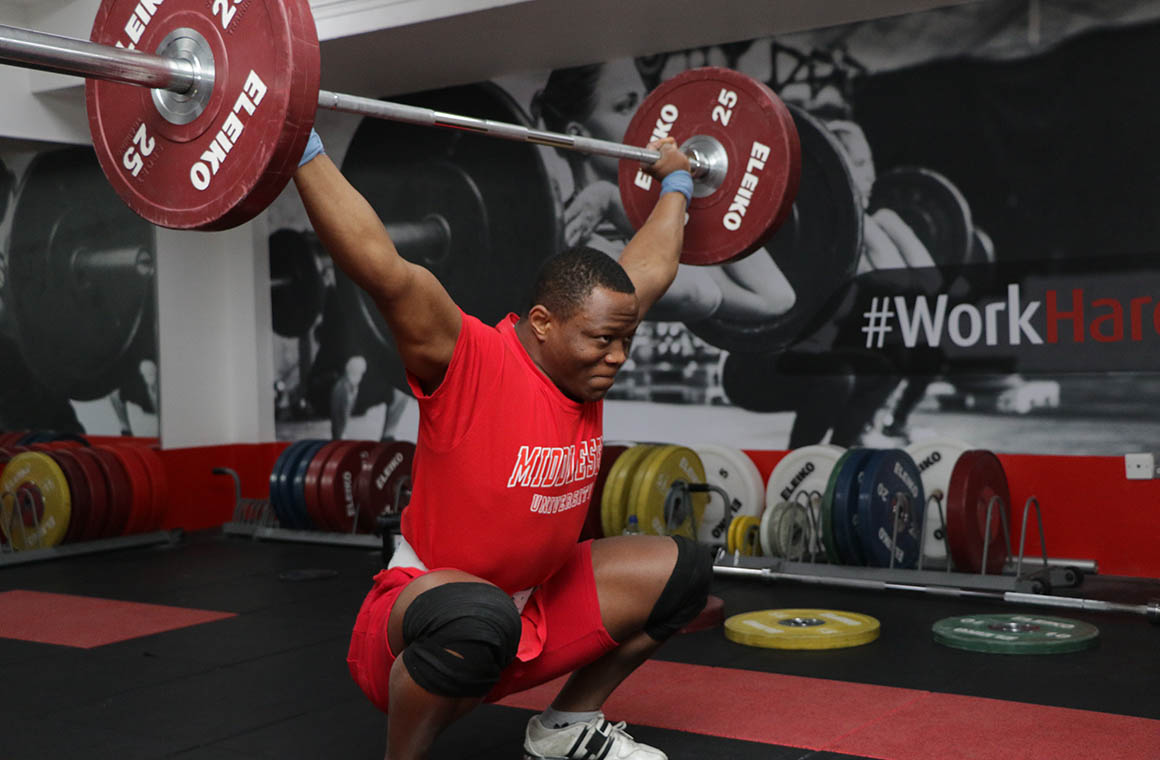 Cyrille warming up in the Fitness Pod at Middlesex

Cyrille Tchatchet’s love of weightlifting brought him to the UK to compete in the Commonwealth Games in 2014. For the next two years his future hung in the balance as he fought for asylum to avoid returning to his native Cameroon.

Having received permission to stay in 2016, Cyrille is now studying BSc Nursing (Mental Health) at Middlesex and going from strength to strength with his weightlifting – most recently winning gold in the 94kg category at the English Weightlifting Championships 2017.

Cyrille began weightlifting at the age of 14, after a photo of his aunt’s husband – an experienced lifter – inspired him to try it for himself. His dedication and focus have since seen him rise to the top level of the sport in the UK, with aspirations to compete in the 2018 Commonwealth Games and the 2020 Tokyo Olympics.

His record in UK competitions and personal bests in the Olympic lifts – the snatch and the clean-and-jerk, the two weightlifting techniques used in Olympic competition – make Cyrille a strong contender at international level.

Cyrille’s refugee status currently excludes him from entering the Commonwealth Games, but that hasn’t affected his determination to compete at the highest level.

British Weight Lifting is working with Cyrille and his coaches on petitioning the Commonwealth Games to allow a team to compete under a refugee flag. With the first ever refugee team having competed at the Rio Olympics in 2016, he’s hoping this is now a possibility.

Cyrille’s other passion – mental health nursing – developed during the long and difficult process of applying for asylum in the UK. For two years he wasn’t allowed to work or enter higher education.

“During those two years I suffered from mild depression, so when I got my leave to remain in the UK I decided to go into mental health nursing to help other people who are struggling.”

After receiving his leave to remain late in 2016 Cyrille was afraid he would have to wait until the following year to start applying to universities. Luckily he discovered he could apply through Clearing and quickly decided Middlesex was the place for him – mainly due to the combination of state-of-the-art nursing and sports facilities. 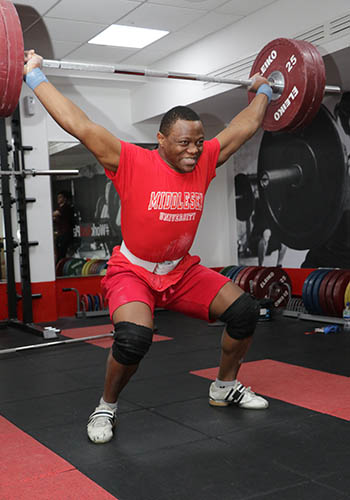 “I phoned and they asked me to email my certificates. I then had to come for a maths and English test and had an interview, then they gave me the offer. Clearing is the best thing you can do, it’s very easy to get here that way.”

Once Cyrille arrived at Middlesex he was awarded a full sports scholarship. He’s now training with the University’s weightlifting club, assisted by the London Sport Institute (LSI) at Middlesex.

Shyam Chavda, a sport science technician at the LSI, has been working closely with Cyrille on his training regime.

“In the short time we have worked with Cyrille he has achieved multiple personal bests, both in training and in competition, with a national gold medal as result for his hard work and dedication.”

“The course really prepared me for going on placement. When I first went into the hospital it was all familiar to me after the skills sessions I’ve had in the simulation labs at Middlesex.

“It’s my first time in a real mental health ward. You need to be calm and enjoy it. The University arranged everything, I get a lot of help here.”

Listening to Cyrille talk about his plans for the future it’s easy to see how he’s been so successful in his sport – he has big ambitions and the determination to see them through.

“I hope to start working as a mental health nurse right after graduation. I’ll be training as well. Even when I was seeking asylum I was still competing.

“I plan to study a Master’s in Strength and Conditioning at Middlesex in the future for my own personal achievement. And I’d like to do the Postgraduate Certificate in Mental Health Nursing once I’ve had three years of work in the field.”

For a man who can clean-and-jerk 190kg Cyrille remains remarkably humble, patient and grounded. He’s grateful to be living in the UK, studying at Middlesex and pursuing his twin passions.