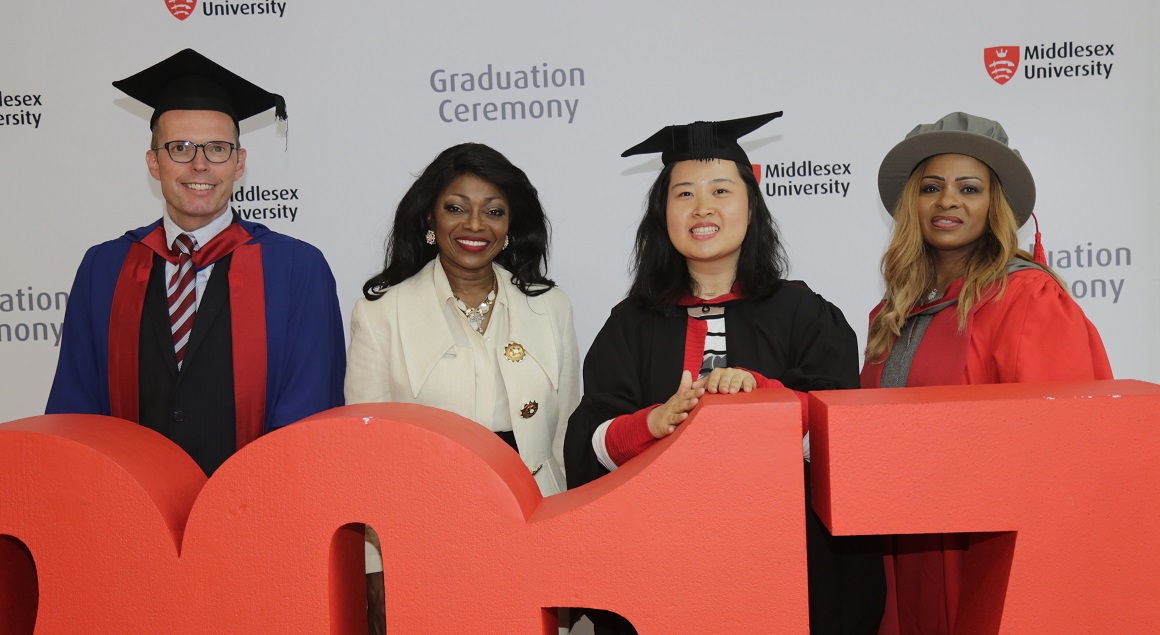 Tianmei Zhou graduated from BA Business Management last week after a remarkable recovery from a near-fatal car accident in November 2015 which initially left her unable to speak or walk.

Tianmei is from Zhanjiang in China but currently lives in Hendon. She was aided in her recuperation and recovery by support from Patti Boulaye who is known for her performances in musicals including Hair as well as Channel 4’s Patti Boulaye Show.

As well as providing support and mentorship on her career, speaking, fashion and cooking Patti even welcomed Tianmei to her home to celebrate Christmas with her family.

Tianmei Zhou is extremely grateful to Patti and Dr Doirean Wilson, who also helped her through this difficult time.

“Now I am graduating I’ve been looking back on my time here,” she said.

“I got to experience so many extremely unforgettable experiences because of the Equality, Diversity and Inclusion class that many international students who come to study abroad would never have got the chance to enjoy.

“I do not know how to express my gratitude to Dr Doirean Wilson who took me to the Mayor of London event at City Hall to celebrate the 50th anniversary of the Race Relations Act where I originally met Patti Boulaye.

“I consider Dr Doirean Wilson to be my life tutor and I will keep applying what I learnt from the Equality, Diversity and Inclusion class.”

Patti Boulaye first met Tianmei in 2015 when she gave a guest talk at Middlesex.

"After the talk I received a delightful email from Tianmei, which included a photo she had taken with me.

“When I went back to address Dr Wilson’s students in 2016, Tianmei was barely recognisable as the vibrant young lady in the photo. Dr Wilson shared Tianmei’s bravery and miraculous recovery from a coma, following her car accident, with me, and the students.

“I was moved by Tianmei’s story and admired her strength of character and I am really proud to have worked with her. Her speech had become slurred and very clipped as a result of the amount of surgery she had been through.

"I arranged with Dr Wilson to help Tianmei with her breathing, diction, pronunciation and deportment. These are topics on which I had trained my clients for many years before establishing Bipada Academy.

“Tianmei’s story has highlighted the great importance of the way Dr Wilson conducts her EDI module, especially the way she shows concern for the future of her students. I am honoured to be associated with Dr Wilson’s module.”

Middlesex University London’s Equality, Diversity and Inclusion module promotes greater awareness and understanding of the importance of diversity issues from both a national and international perspective.

It also provides insight into the implications of diversity from a societal, organisational and employee standpoint.

“It was a pleasure to teach Tianmei," she said.

"She was not only enthusiastic and keen to learn about diversity, but was determined to work harmoniously with those of difference.

“She made a valid contribution to team tasks and was determined to achieve despite her adversity. This approach won her respect from her fellow students, plus her hard work paid off as she was able to achieve a distinction grade for my module.

"I am very proud of her and wish her all the best.”

Find out more about studying business management at Middlesex