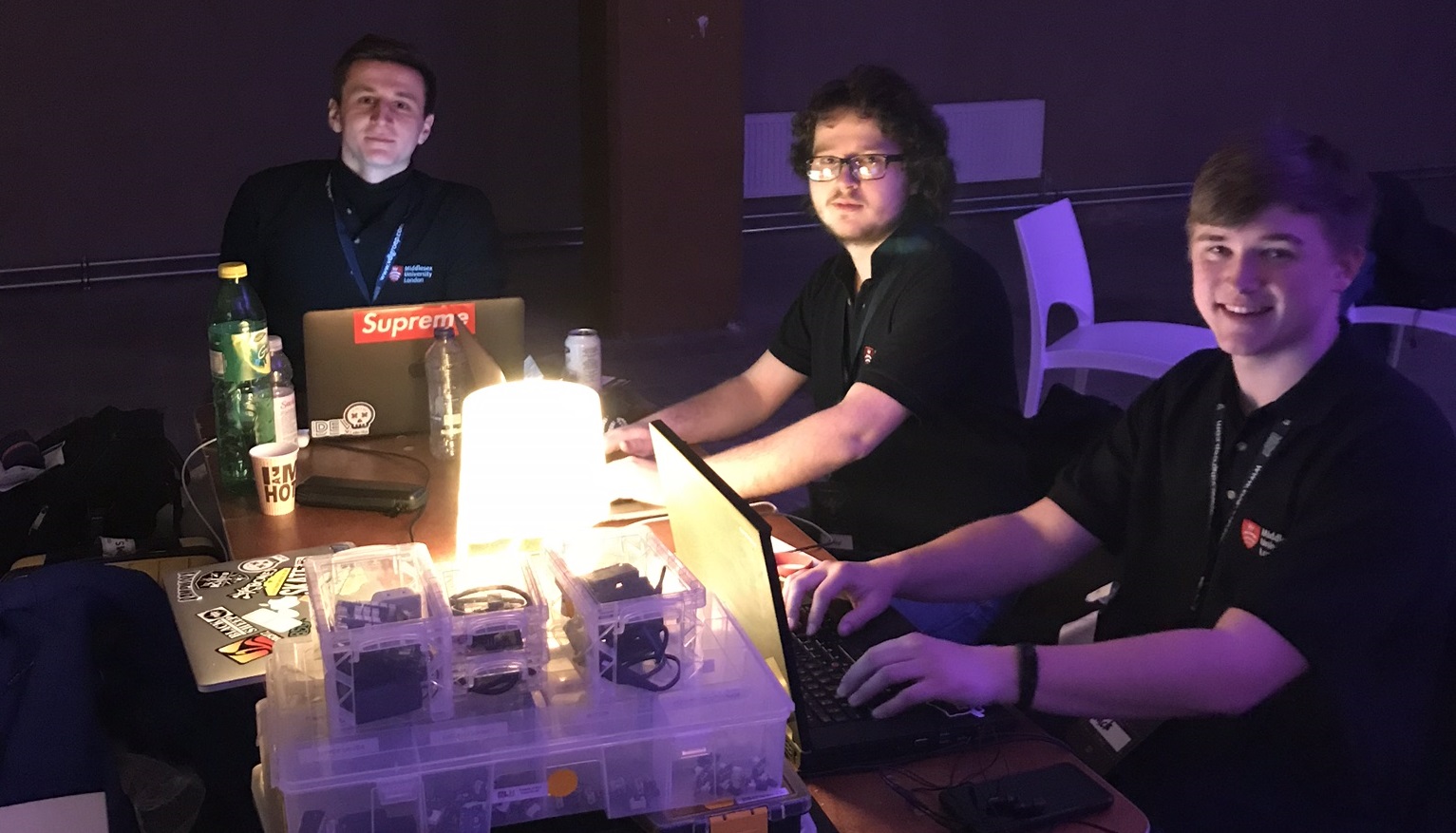 A group of Middlesex students has set up a hack team, open to members of the University in all subject areas, to encourage more participation in hackathons.

The society, registered on March 14, meets weekly for workshops in a range of programming languages, from Python to PHP and Node.js. In addition, there are sessions in Operating Systems, CAD and different pieces of hardware including Arduino development.

The coding course is broken down into blocks of a few weeks each, one language per block, so that while the organisers stress it is hard work that people have to apply themselves to, missing a week or two isn’t a huge setback.

Gaining this broad range of knowledge is an asset in hackathons where the rules don’t specify which development language you have to use, hack team President Igor Topolski explains. It is also desirable for business since firms tend to look for developers who have competency in a variety of languages.

In the past six weeks, Middlesex teams have taken part in the international collaborative design HEX hackathon in Eindhoven and the Intuit Quickbooks Small Business Hackathon in London.

"Coding is a bit like cycling - anyone can do simple rides"
Franco Raimondi, Professor of Computer Science

Igor Topolski, a Graduate Academic Assistant and MSc by Research student who did his undergraduate degree at Middlesex in Computer Systems Engineering says, “It seems easy, just one day of programming. But it's different when you have to find an idea, a structure to implement it, and then after 24 hours of constant physical and mental work, present it in front of 100 or 200 people.

"So it incorporates multiple things which get harder and harder every hour you are there. But it teaches you the most, I believe. It's loaded me with positive energy and I'm looking forward to other hackathons.”

“It can significantly boost our position on the job market” says third year student and Student Learning Assistant Adam Jarzebak. “Many of these events are visited by employers. At one hackathon half a year ago, I met someone who employed me later on”. 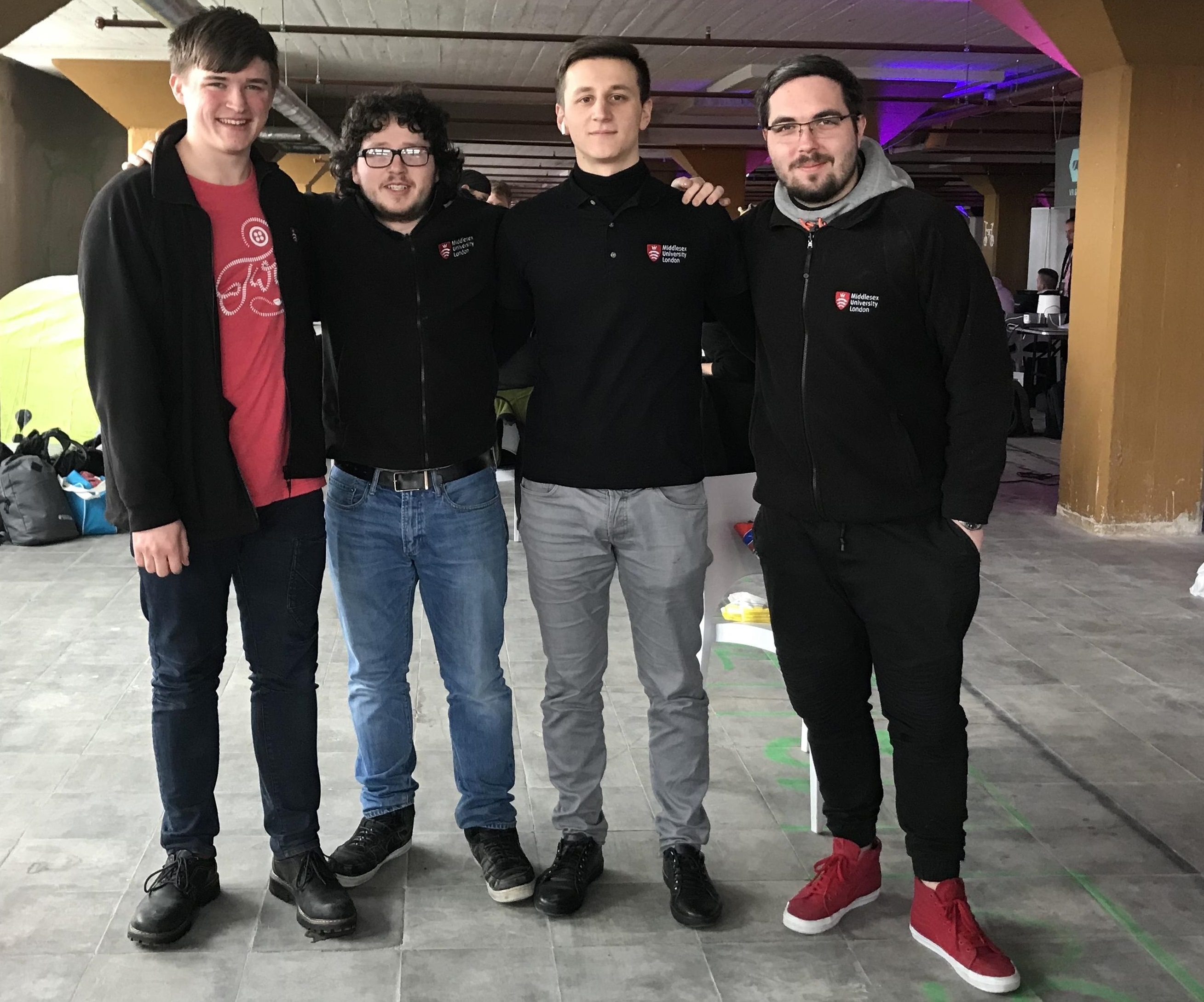 The TechCrunch Disrupt London hackathon in December 2016, after which Middlesex competitors were invited to attend a TechCrunch conference as one of the runner-up teams, left its mark on a number of participants.

“It made me want to compete more and more” says second year student Daniel Ionita. “In just 36 hours I’d learned a new programming language which I had no idea about and I’d got over my fear of speaking on stage”.

“Everyone’s dying with tiredness – you start fighting with yourself,” says third year student and one of four hack team vice-presidents Timbo Cole of the hackathon experience. He credits Middlesex’s “exceptional staff” for giving him great opportunities. He’s a Student Learning Assistant and a technical assistant, whose responsibilities include programming humanoid robot Pepper who can recognise common emotions.

Technical tutor Michael Heeney, who has taught Jarzebak, Cole and other hack team members such as first year student Artur Graczyk says, “I am proud how active they are. They started doing hackathons out of their own passion. They are actively involving new students and now we have groups collaborating on internal and external projects from all years of the degree. All of them have a promising future ahead!”

Professor of Computer Science Franco Raimondi would like to see students from non-technological fields join the hack team – “Diversity is very good, hackathons require lateral thinking” he says. But success only comes through a lot of practice. “Coding is a bit like cycling, anyone can do simple rides”, he says. "But it requires a lot of training, experience and teamwork to win races.”